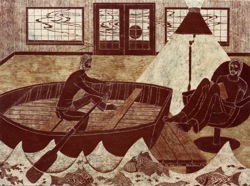 French, from in- + passer to pass

2: an impassable road or way : cul-de-sac

A bargaining impasse occurs when the two sides negotiating an agreement are unable to reach an agreement and become deadlocked. An Impasse is almost invariably mutually harmful, either as a result of direct action which may be taken such as a strike in employment negotiation or sanctions/military action in international relations, or simply due to the resulting delay in negotiating a mutually beneficial agreement.

Some theorists contend that impasses are used by negotiating parties in situations of imperfect information as a method of signalling to the other side the seriousness of their position. Impasse provides a credible signal that a party’s position is genuine and not merely an ambit claim.

Impasse may also arise if parties suffer from self-serving bias. Most disputes arise in situations where facts are able to be interpreted in multiple ways, and if parties interpret the facts to their own benefit they may be unable to accept the opposing party’s claim as reasonable. They may believe the other side is either bluffing or acting unfairly and deserve to be "punished".

As bargaining impasse is mutually harmful, it may be beneficial for the parties to accept binding arbitration or mediation to settle their dispute, or the state may impose such a solution. Indeed, compulsory arbitration following impasse is a common feature of industrial relations law in the United States and elsewhere.

The word impasse may also refer to any situation in which no progress can be made. A stalemate in chess is a common example.