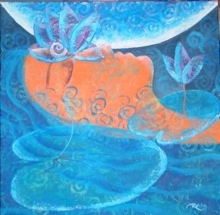 Intuition underpins beliefs which we cannot necessarily justify. For this reason, it has been the subject of study in psychology, as well as a topic of interest in the supernatural.

Philosophy considers it is an act by which the mind perceives the agreement or disagreement of two ideas. When using only intuition, the truth of the proposition is immediately known right then, the moment it is presented. This is without the intervention of other ideas or deductive reasoning.

In common usage, intuitions lead us to believe things without being able to articulate evidence or reasons for those beliefs. In philosophy, the epistemic credentials of various types of intuition may be investigated, or "intuition" may be used as a technical term to single out a particular type of mental state or propositional attitude. Intuitions are distinguished from beliefs, since we can hold beliefs which are not intuitive, or have intuitions for propositions that we know to be false.

For lessons on the topic of Intuition, follow this link.

"Intuitionism" is a position advanced in philosophy of mathematics derived from Kant's claim that all mathematical knowledge is knowledge of the pure forms of the intuition - that is, intuition that is not empirical (Prolegomena, p.7). Intuitistic logic was devised by Arend Heyting to accommodate this position (and has been adopted by other forms of [constructivism in general). It is characterized by rejecting the law of excluded middle: as a consequence it does not in general accept rules such as double negation elimination and the use of reductio ad absurdum to prove the existence of something.

In contemporary analytic philosophy, appeals to our intuitions are an important method for testing claims. A characteristic example is the post-Gettier literature concerning the analysis of knowledge. A philosopher proposes a definition of knowledge, such as the justified true belief account. Another philosopher constructs a hypothetical case where our inclination is to judge that the definition is met but the subject lacks knowledge or vice versa. Typically, this leads to the rejection of that account, though Brian Weatherson has noted that the weight placed on intuitions varies between different subfields.