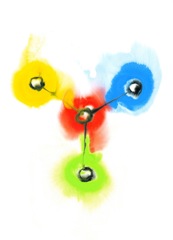 For lessons on the related topic of Evolution, follow this link.

Involution according to Esoteric cosmology

In Theosophy, Anthroposophy and Rosicrucianism, involution and evolution are part of a complex sequence of [[cosmic cycles, called Round. When the universe attains a stage of sufficient density, the individual spirit is able to descend and participate in the evolution. Involution thus refers to the incarnation of spirit in an already established matter, the necessary prerequiste of evolution:

As an example, the so-called descent of the Monad into matter means an involution or involving or infolding of spiritual potencies into material vehicles which coincidentally and contemporaneously, through the compelling urge of the infolding energies, unfold their own latent capacities, unwrap them, roll them forth; and this is the evolution of matter. – Gottfried de Purucker[1]

That period of time devoted to the attainment of self-consciousness and the building of the vehicles through which the spirit in man manifests, is called "Involution." Its purpose is to slowly carry life lower and deeper into denser and denser matter for the building of forms, till the nadir of materiality is reached. From that point, life begins to ascend into higher worlds. This succeeding period of existence, during which the individual human being develops self-consciousness into divine omniscience, is called "spiritual evolution."

In the cosmology of Surat Shabda Yoga, involution and evolution apply to both the macrocosm, the whole of creation, and the microcosm, the constitution of an individual soul.

The Rosicrucian Cosmo-Conception, a Rosicrucian text written by Max Heindel, advances the concept of epigenesis as the key related to the evolution (after an involutionary period) of human beings.

Involution according to Sri Aurobindo

For Sri Aurobindo, involution is the process by which the Omnipresent Reality, i.e. the Absolute, Brahman extends Itself to create a universe of separate forms from out of Its own Force/Energy.

Sat, Chit-Tapas, and Delight/Ananda are the three aspects of Satchitananda, and are mentioned in terms of Involution . Spirit or consciousness manifests as these three, and then as the intermediate link of Supermind, which is transitional between the higher and lower (matter, life, and mind) nature.

The reason for involution is Delight - the Delight of Being (the Spirit or Absolute) moving to Delight of Becoming (temporal existence, the cosmos). Being throws itself forward into a multiplicity of forms, becoming lost in the inconscience of matter, and then through evolution it partakes in the Delight of rediscovering the Spirit which had been hidden in the interim.

Evolution is thus the movement forward by which the created universe evolves from its initial state of inconscience (i.e. as matter), evolves animated life forms and mental beings (i.e. humans), and continues to evolve spiritual properties, and in that process rediscovers its Source. Such an Evolution of animated forms is only possible because at each stage of development, the developing entity contains within itself the conception of what it may become. Thus, the evolution of animated life out of matter supposes a previous involution of that animated capacity. This is akin to a seed that already has the essence of the tree that will emerge from it.

Each plane emerges from an earlier plane through the evolutionary process, which takes place in chronological time. But in a parallel construction, each of these new planes can be understood as being a descendent of its corresponding higher order plane from the Infinite. Thus, when mentality emerged in the universe, the universal plane of Mind was implanted to a degree in those beings harboring that mentality.

The evolution is the development of all entities in the cosmos, including humans, in order to attain their fulfillment, including the discovery of spiritual Delight, which was, and always is, the experience of the Source Creator. The evolution is the progressive development from the original inconscience of matter into life (movement, sensation, desire, etc. and living physical beings), and from thence to mind (in conscious animals and most especially humans - the self-conscious thinking animal), and from thence to spiritualized mind, culminating in the The Supermind or Truth Consciousness (as supramental individuals, and finally the supramental, i.e. a divine life on earth.)

In integral thought, involution is the process by which the Divine manifests the cosmos. The process by which the creation rises to higher states and states of consciousness is the evolution. Involution prepares the universe for the Big Bang; evolution continues from that point forward. The term involution comes from the idea that the divine involves itself in creation. After the creation, the Divine (i.e. the Absolute, Brahman, God) is both the One (the Creator) and the Many (that which was created).

The integral philosopher Ken Wilber refers to involution in his online chapter of Kosmic Karma, employing concepts from Plotinus, Advaita Vedanta, Tibetan Buddhism, and Sri Aurobindo. According to Wilber, the cosmic evolution described in his previous works is preceded by an involution of Spirit into Matter. This involution follows the reverse stages to the sequence of evolution - e.g. Spirit to soul to mind to life to matter. Once the stage of insentient, lifeless matter is attained, then "something like the Big Bang occurs", whereupon matter and manifest world come into concrete existence, from which stage evolution follows. [1]

A term for the relationship in some societies between socioeconomic stagnation and increasingly elaborate cultural production.[2]

André Lalande, the French philosopher, was born in Dijon and entered the École Normale Supérieure in 1885. He took his doctorate in 1899 and taught in lycées until he was appointed first to a lectureship and then, in 1904, to a chair of philosophy at the University of Paris.

Lalande was a rationalist whose whole life was devoted to the cause of international communication and the dissemination of knowledge. His constant preoccupation after 1902 was the launching, and subsequent reediting, of the Vocabulaire technique et critique de la philosophie, which aimed at the concise definition and standardization of philosophical terminology. His own philosophical work corresponds to this recognition and promotion of an interdependent humanity.

In his thesis of 1899, L'idée directrice de la dissolution opposée à celle de l'évolution, Lalande challenged Herbert Spencer's thesis that progress is evolutionary and differentiating, and held that, on the contrary, dissolution—or, as he later called it, involution—is more widespread and significant. Involution, or movement from the heterogeneous to the homogeneous, is observable in nature as entropy, or increase of randomness. In human life, however, this movement toward uniformity is fruitful and is served by reason, which, in scientific investigation, leads to the progressive subsumption of more and more classes of phenomena under fewer general laws.

Lalande disapproved of an imposed uniformity, which represents merely the transference from the individual to the group of evolutionary, divisive drives. True reason ensures that although people feel differently, they shall think in the same way and thus understand each other even when they do not resemble each other. Lalande's concern was for the individual, whose uniqueness is sacrificed to function in a rigidly specialized and differentiated society. The application of reason to life in the technological field liberates the individual from his functional role, and the application of reason in the cultural field enables men to afford, and to benefit from, the diversity that is their birthright.

In La raison et les normes Lalande restated his involutionist case in the light of recent philosophies of "being-in-the-world." He took cognizance, for example, of the argument that geometrical, objective space is derived from the neuromotor "spaces" of man facing his tasks, but for Lalande the superiority of a common space amenable to conceptualization remained unimpaired. Similarly, he preferred chronological time to the "real" time of naive emotional experience. Lalande reaffirmed his universalist conception of rationality against more recent phenomenological thinking.[3]