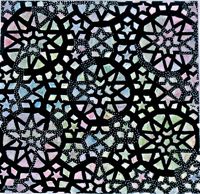 Lattice work is an ornamental, lattice framework consisting of a criss-crossed pattern of strips of building material, usually wood or metal, but it can be made of any building material. The design is created by crossing the strips to form a decorative network. Latticework can also be used to support a structure, such as lattice girder bridge supports. 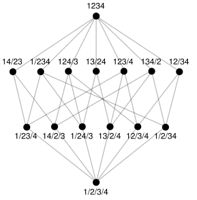 The name "lattice" is suggested by the form of the "Hasse diagram" depicting it.

In mathematics, a lattice is a partially ordered set (also called a poset) in which subsets of any two elements have a unique supremum (the elements' least upper bound; called their |join) and an infimum (greatest lower bound; called their meet). Lattices can also be characterized as algebraic structures satisfying certain axiomatic |identities. Since the two definitions are equivalent, lattice theory draws on both order theory and universal algebra. Semilattices include lattices, which in turn include Heyting and Boolean algebras. These "lattice-like" structures all admit order-theoretic as well as algebraic descriptions.[1]

Concept lattice or formal concept analysis is a principled way of automatically deriving an ontology from a collection of objects and their properties. The term was introduced by Rudolf Wille in 1984, and builds on applied lattice and order theory that was developed by Birkhoff and others in the 1930's.

Natural property clusters correspond one-for-one with natural object clusters, and a concept is a pair containing both a natural property cluster and its corresponding natural object cluster. The family of these concepts obeys the mathematical axioms defining a lattice, and is called a concept lattice (in French this is called a Treillis de Galois because the relation between the sets of concepts and attributes is a Galois connection).

Note the strong parallel between "natural" property clusters and definitions in terms of individually necessary and jointly sufficient conditions, on one hand, and between "natural" object clusters and the extensions of such definitions, on the other. Provided the input objects and input concepts provide a complete description of the world (never true in practice, but perhaps a reasonable approximation), then the set of attributes in each concept can be interpreted as a set of singly necessary and jointly sufficient conditions for defining the set of objects in the concept. Conversely, if a set of attributes is not identified as a concept in this framework, then those attributes are not singly necessary and jointly sufficient for defining any non-empty subset of objects in the world. 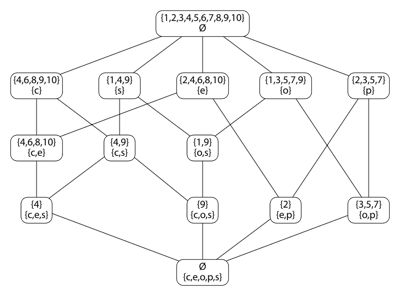 A concept lattice for objects consisting of the integers from 1 to 10, and attributes composite (c), square (s), even (e) odd (o) and prime (p).
The lattice is drawn as a Hasse diagram

Consider O = {1,2,3,4,5,6,7,8,9,10}, and A = {composite, even number, odd number, prime number, square number. The smallest concept including the number 3 is the one with objects {3,5,7}, and attributes odd number, prime number, for 3 has both of those attributes and {3,5,7} is the set of objects having that set of attributes. The largest concept involving the attribute of being square is the one with objects {1,4,9} and attributes {square}, for 1, 4 and 9 are all the square numbers and all three of them have that set of attributes. It can readily be seen that both of these example concepts satisfy the formal definitions below