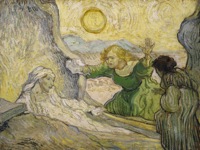 Lazarus of Bethany, also known as Lazarus of the Four Days, is the subject of the most prominent miracle attributed to Jesus in the Gospel of John, in which Jesus restores him to life four days after his death. The Eastern Orthodox and Roman Catholic traditions offer varying accounts of the later events of his life.

In the context of the Gospel of John, the narrative of the Raising of Lazarus forms "the climactic sign... Each of Jesus' seven signs illustrates some particular aspect of his divine authority, but this one exemplifies his power over the last and most irresistible enemy of humanity--death. For this reason it is given a prominent place in the gospel."

The name Lazarus (from the Hebrew: אלעזר, Elʿāzār, Eleazar - "God (has) helped") is also given to a second figure in the Bible: in the narrative of Lazarus and Dives, attributed to Jesus in the Gospel of Luke. Also called Dives and Lazarus, or The Rich Man and the Beggar Lazarus, the narrative tells of the relationship (in life and in death) between an unnamed rich man and a poor beggar named Lazarus. While the two characters named Lazarus have sometimes been conflated historically, they are generally understood to be two separate characters. Allusions to Lazarus as a poor beggar taken to the "Bosom of Abraham" should be understood as referring to the Lazarus mentioned in Luke, rather than the Lazarus raised from the dead in John.

In allusion to John's account of the resurrection of Lazarus, the name Lazarus is often used to connote apparent restoration to life. For example, the scientific term "Lazarus taxon" denotes organisms that reappear in the fossil record after a period of apparent extinction; and the Lazarus phenomenon refers to an event in which a person spontaneously returns to life (the heart starts beating again) after resuscitation has been given up. There are also numerous literary uses of the term.[1]