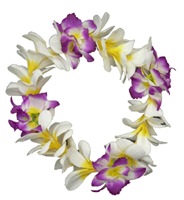 Lei is a Hawaiian word for a garland or wreath. More loosely defined, a lei is any series of objects strung together with the intent to be worn. The most popular concept of a lei in Hawaiian culture is a wreath of flowers draped around the neck presented upon arriving or leaving as a symbol of affection. This concept was popularized through tourism between the Hawaiian Islands and the continental United States in the 19th and 20th centuries.

Children and sweethearts are poetically referred to as "lei" and many ancient and modern songs and chants refer to this imagery.

A lei (nā lei is the plural in the Hawaiian language) may be composed of a pattern or series of just about anything, but most commonly consists of fresh natural foliage such as flowers, leaves, vines, fern fronds, and seeds. The most commonly used flowers are those of plumerias, tuberose, carnations, orchids, and pikake, though maile leaves, ferns, and ti leaves are extremely popular as well as traditional among hula dancers. Other types of lei may include sea or land shells, fish teeth, bones, feathers, plastic flowers, fabric, paper (including origami and monetary bills), candy, or anything that can be strung together in a series or pattern and worn as a wreath or a necklace. The Hawaiian Island of Ni'ihau is famous for its lei made of tiny gem-like shells.

Nā lei developed for adornment; with little resources for ornamentation, most garlands are made of local flora and fauna like shells, teeth, flowers, and feathers. The lei has sacred uses associated with gods and many social uses associated with celebration. Nā lei are used as gifts between friends and during special occasions. Chiefs would also create a special maile lei as a symbol of peace agreements. Nā lei were created by Polynesians, and their creation spread throughout the Pacific from New Zealand to Hawai'i during the period of Austronesian expansion and Pacific ocean settlement from the 8th to 14th centuries. During this period of expansion, nā lei across the Pacific were very similar; however, during its subsequent period of isolation, Hawai'ians developed their own unique lei traditions.