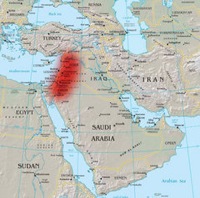 French levant, present participle of lever to rise, used subst. for the point where the sun rises. The term Levant, which first appeared in English in 1497, originally meant the East in general. It is borrowed from the French levant 'rising', that is, the point where the sun rises. Similar etymologies are found in Ancient Greek Ἀνατολή (cf. Anatolia) and Germanic Morgenland.

b. The eastern part of the Mediterranean, with its islands and the countries adjoining.

The Levant (pronounced /ləˈvænt/) describes, traditionally, the Eastern Mediterranean at large, but can be used as a geographical term that denotes a large area in Western Asia formed by the lands bordering the eastern shores of the Mediterranean, roughly bounded on the north by the Taurus Mountains, on the south by the Arabian Desert, and on the west by the Mediterranean Sea, while on the east it extends towards the Zagros Mountains. The Levant includes modern Lebanon, Syria, Jordan, Israel and the Palestinian Territories and is similar to the historic area called Syria or Greater Syria. Occasionally Cyprus, Sinai and Iraq are included. The UCL Institute of Archeology describes the Levant as the "crossroads of western Asia, the eastern Mediterranean and northeast Africa".

The term Levant was originally applied to the "Mediterranean lands east of Italy", from the Middle French word levant meaning "the Orient". Historically, the "trade on the Levant" between Western Europe and the Ottoman Empire was of great economic importance. An imprecise term, Levant refers to an area of cultural habitation rather than to a specific geographic region, and its meaning shifts according to historical and cultural reference and preference.[1]