From Nordan Symposia
(Redirected from Leverage)
Jump to navigationJump to search 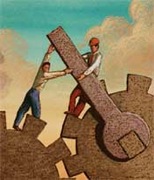 In physics, a lever (from French lever, "to raise", c.f. a levant) is a rigid object that is used with an appropriate fulcrum or pivot point to multiply the mechanical force that can be applied to another object. This leverage is also termed mechanical advantage, and is one example of the principle of moments. A lever is one of the six simple machines. Archimedes once said, "Give me a lever long enough and a fulcrum on which to place it, and I shall move the world." First class levers are similar but not the same as second or third class levers, in which the fulcrum, resistance, and effort are in different locations.

The principle of leverage can be derived using Newton's laws of motion, and modern statics. It is important to note that the amount of work done is given by force times distance. To use a lever to lift a certain unit of weight with a force of half a unit, the distance from the fulcrum to the spot where force is applied must be exactly twice that of the distance between the weight and the fulcrum. For example, to cut in half the force required to lift a weight resting 1 meter from the fulcrum, we would need to apply force 2 meters from the other side of the fulcrum. The amount of work done is always the same and independent of the dimensions of the lever (in an ideal lever). The lever only allows to trade force for distance.

The three classes of levers

There are three classes of levers which represent variations in the location of the fulcrum and the input and output forces.

A first-class lever is a lever in which the fulcrum is located between the input effort and the output load. In operation, a force is applied (by pulling or pushing) to a section of the bar, which causes the lever to swing about the fulcrum, overcoming the resistance force on the opposite side. The fulcrum may be at the center point of the lever as in a seesaw or at any point between the input and output. This supports the effort arm.

1. Seesaw (also known as a teeter-totter)
2. Crowbar (curved end of it)
3. Hammer Claw , when pulling a nail with the hammer's claw

Third class lever. For the lever in this diagram to work correctly, one must assume that the fulcrum is attached to the bar or acting in opposition to the other two forces.

For this class of levers, the input effort is higher than the output load, which is different from second-class levers and some first-class levers. However, the distance moved by the resistance (load) is greater than the distance moved by the effort. Since this motion occurs in the same length of time, the resistance necessarily moves faster than the effort. Thus, a third-class lever still has its uses in making certain tasks easier to do. In third class levers, effort is applied between the output load on one end and the fulcrum on the opposite end.