From Nordan Symposia
(Redirected from Magnifies)
Jump to navigationJump to search 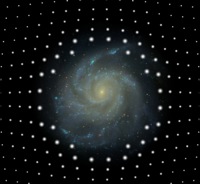 b : to cause to be held in greater esteem or respect

b : exaggerate <magnifies every minor issue to crisis proportions>

Magnification is the process of enlarging something only in appearance, not in physical size. This enlargement is quantified by a calculated number also called "magnification". When this number is less than one it refers to a reduction in size, sometimes called "minification" or "de-magnification".

Typically magnification is related to scaling up visuals or images to be able to see more detail, increasing resolution, using optics, printing techniques, or digital processing. In all cases, the magnification of the image does not change the perspective of the image.