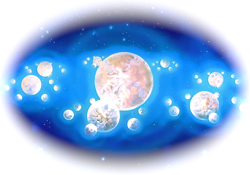 The Creator Son, when on Urantia, spoke of the "many mansions in the Father's universe." In a certain sense, all fifty-six of the encircling worlds of Jerusem are devoted to the transitional culture of ascending mortals, but the seven satellites of world number one are more specifically known as the mansion worlds.

Transition world number one itself is quite exclusively devoted to ascendant activities, being the headquarters of the finaliter corps assigned to Satania. This world now serves as the headquarters for more than one hundred thousand companies of finaliters, and there are one thousand glorified beings in each of these groups.

For lessons on the topic of Mansion Worlds, follow this link.

When a system is settled in light and life, and as the mansion worlds one by one cease to serve as mortal-training stations, they are taken over by the increasing finaliter population which accumulates in these older and more highly perfected systems.

The seven mansion worlds are in the charge of the morontia supervisors and the Melchizedeks. There is an acting governor on each world who is directly responsible to the Jerusem rulers. The Uversa conciliators maintain headquarters on each of the mansion worlds, while adjoining is the local rendezvous of the Technical Advisers. The reversion directors and celestial artisans maintain group headquarters on each of these worlds. The spironga function from mansion world number two onward, while all seven, in common with the other transitional-culture planets and the headquarters world, are abundantly provided with spornagia of standard creation.