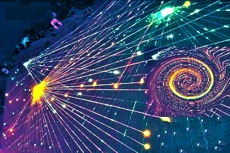 The Seven Master Spirits of Paradise are the primary personalities of the Infinite Spirit. In this sevenfold creative act of self-duplication the Infinite Spirit exhausted the associative possibilities mathematically inherent in the factual existence of the three persons of Deity. Had it been possible to produce a larger number of Master Spirits, they would have been created, but there are just seven associative possibilities, and only seven, inherent in three Deities. And this explains why the universe is operated in seven grand divisions, and why the number seven is basically fundamental in its organization and administration.

For lessons on the topic of the Seven Master Spirits, follow this link.

The Seven Master Spirits thus have their origin in, and derive their individual characteristics from, the following seven likenesses:

In spirit character and nature these Seven Spirits of Paradise are as one, but in all other aspects of identity they are very unlike, and the results of their functioning in the superuniverses are such that the individual differences of each are unmistakably discernible. All the afterplans of the seven segments of the grand universe—and even the correlative segments of outer space—have been conditioned by the other-than-spiritual diversity of these Seven Master Spirits of supreme and ultimate supervision.

The Master Spirits have many functions, but at the present time their particular domain is the central supervision of the seven superuniverses. Each Master Spirit maintains an enormous force-focal headquarters, which slowly circulates around the periphery of Paradise, always maintaining a position opposite the superuniverse of immediate supervision and at the Paradise focal point of its specialized power control and segmental energy distribution. The radial boundary lines of any one of the superuniverses do actually converge at the Paradise headquarters of the supervising Master Spirit.[1]