From Nordan Symposia
(Redirected from Mating)
Jump to navigationJump to search 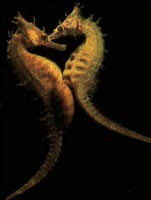 b : to provide a mate for

In biology, mating is the pairing of opposite-sex or hermaphroditic organisms for copulation and in social animals it also includes the raising of their offspring. For animals, mating methods include random mating, disassortative mating, assortative mating, or a mating pool.

In some birds, it includes such behaviors as nest-building and feeding offspring. The human practice of mating domesticated animals and of artificially inseminating them is part of animal husbandry.

Copulation is the union of the sex organs of two sexually reproducing animals for insemination and subsequent internal fertilization. The two individuals may be of opposite sexes or hermaphroditic, as is the case with, for example, snails.