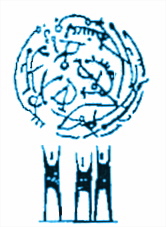 Humans are bipedal primates belonging to the species Homo sapiens (Latin: "wise man" or "knowing man") in Hominidae, the great ape family. They are the only surviving member of the genus Homo. Humans have a highly developed brain, capable of abstract reasoning, language, introspection, and problem solving. This mental capability, combined with an erect body carriage that frees the arms for manipulating objects, has allowed humans to make far greater use of tools than any other species. Recent mitochondrial DNA and fossil evidence suggest modern humans originated in Africa about 200,000 years ago..(1) Some other theories of human origin may be explored here. However humans now inhabit every continent, with a total population of 7.7 billion as of November 2019.(2)

Like most higher primates, humans are social by nature. However, humans are uniquely adept at utilizing systems of communication for self-expression, the exchange of ideas, and organization. Humans create complex social structures composed of many cooperating and competing groups, from families to nations. Social interactions between humans have established an extremely wide variety of values, social norms, and rituals, which together form the basis of human society. Humans have a marked appreciation for beauty and aesthetics which, combined with the human desire for self-expression, has led to cultural innovations such as art, literature and music.

Humans are noted for their desire to understand and influence their environment, seeking to explain and manipulate natural phenomena through science, philosophy, mythology and religion. This natural curiosity has led to the development of advanced tools and skills, which are passed down culturally; humans are the only extant species known to build fires, cook their food, clothe themselves, and use numerous other technologies.

For lessons on the topic of Humanity, follow this link.

The English adjective human is a Middle English loan from Old French humain, ultimately from Latin hūmānus, the adjective of homō "man". Use as a noun (with a plural humans) dates to the 16th century.[6] The native English term man is now often reserved for male adults, but can still be used for "mankind" in general in Modern English.[7] The word is from Proto-Germanic *mannaz, from a Proto-Indo-European(PIE) root *man-, cognate to Sanskrit manu-.

At first only the spirit of intuition could function in the instinctive and reflex behavior of the primordial animal life. With the differentiation of higher types, the spirit of understanding was able to endow such creatures with the gift of spontaneous association of ideas. Later on we observed the spirit of courage in operation; evolving animals really developed a crude form of protective self-consciousness. Subsequent to the appearance of the mammalian groups, we beheld the spirit of knowledge manifesting itself in increased measure. And the evolution of the higher mammals brought the function of the spirit of counsel, with the resulting growth of the herd instinct and the beginnings of primitive social development.

Increasingly, on down through the dawn mammals, the mid-mammals, and the Primates, we had observed the augmented service of the first five adjutants. But never had the remaining two, the highest mind ministers, been able to function in the Urantia type of evolutionary mind.

Imagine our joy one day--the twins were about ten years old--when the spirit of worship made its first contact with the mind of the female twin and shortly thereafter with the male. We knew that something closely akin to human mind was approaching culmination; and when, about a year later, they finally resolved, as a result of meditative thought and purposeful decision, to flee from home and journey north, then did the spirit of wisdom begin to function on Urantia and in these two now recognized human minds.[2]