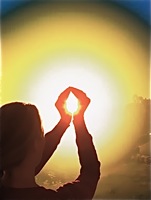 Love is our soul purpose.

Purpose is the cognitive awareness in cause and effect linking for achieving a goal in a given system, whether human or machine. Its most general sense is the anticipated result which guides decision making in choosing appropriate actions within a range of strategies in the process (a conceptual scheme) based on varying degrees of ambiguity about the knowledge that creates the contextualisation for the action. Purpose serves to change the state of conditions in a given environment, usually to one with a perceived better set of conditions or parameters from the previous state. This change is the motivation that serves the locus of control and goal orientation. In psychology and psychiatry, the experience of lacking a purpose in one's life is known as accidy.

First attested in c.1290, from earl Old French porpos "aim, intention", purpose is related to from porposer "to put forth," from Vulgar Latin corruption of por- "forth" (Latin pro- "forth") and Old French poser "to put, place".[1] Purpose is related to the term pose used from 1374 as to "put in a certain position," or "suggest, propose, suppose, assume," a term use in Late Latin debating (c.300–c.700) from pausare "to halt, rest, pause".[2]

“There is a fundamental human need for guiding ideals that give meaning to our actions”, states Roger Fisher. Renowned psychiatrist Victor Frankl’s premise is that ‘man’s search for meaning’ (see Victor Frankl's book) is the primary motivation of his life. He speaks of the ‘will to meaning’ as opposed to Freud’s’ ‘will to pleasure’ and Friedrich Nietzsche’s ‘will to power’.

According to some philosophies, purpose is central to a good human life. Helen Keller wrote that happiness comes from "fidelity to a worthy purpose", some people hold that God assigns purposes to people and that it is their mission to fulfill them. Others hold that purpose is not inherent, but instead freely chosen (or not chosen) by individuals. Among these, some say that natural propensities may determine what sorts of purposes a person needs to pursue, but do not guarantee that he or she will pursue them, that being dependent on free choice.

Modern spiritual philosophy sees the purpose in life as improving the environment and world condition for all beings. In the most immediate sense this means each individual finding the special talents which are a gift to serve others. This in turn is found in pursuing a soul level joy, so that the personal and highest individual purpose of life is pursuit of soul level joy. This is the first joy, that which has followed the individual from birth. In most instances it begins with the desire for acceptance and evolves to discovery of each person's genius or gift to serve.

From a scientific point of view the purpose of evolution is the progression of genes. The evolution of life is value free and purpose neutral. However, this is not the same thing as a human being's purpose. Best expressed by popular evolutionary biologist and TV personality Richard Dawkins, purpose is something that "grows up in the universe" (see: Growing Up in the Universe).[3] Man has the complex genetic make-up that allows him to choose a purpose for himself.

Opposed to that view is a famous work by the Christian Rick Warren who wrote the best-selling book Purpose Driven Life.[4]. This work expresses the common religious belief that there exists an inherent purpose of life, as provided by God. There has also been a lot of scientific criticism of Rick Warren's book. An opinionated critique was done by Dan Dennet.[5]

A position that gives room for both is the “Purpose-Guided Education” approach developed by Jerry Pattengale. It structures one's understanding about their purpose in relation to their evaluation of worthwhile causes and how their lives and gifts are attached to one.

Relationship as a purpose

The Dalai Lama, a Buddhist, states in The Art of Happiness that the purpose of life is the pursuit of happiness, which would seem to present a circular argument with the definition of purpose according to other philosophies mentioned above if purpose and happiness are the same thing. One important distinction to make is that statistically, those people who behave or appear happy tend to be altruistic and less egotistic. It would follow that an appropriate choice of purpose altruistic in nature leads to happiness, or that a willful drive to happiness develops altruistic traits.

According to Maslow's hierarchy of needs, relationship, acceptance, and sexual intimacy is fundamental to meeting human needs and conducive to building happiness. Or moreover, that the pursuit of these things, though not necessarily directly, are the underlying purpose of one's actions. Concerning intimacy, the Dalai Lama's view is that sexual intimacy is not necessarily conducive to happiness and fulfillment. It only serves to provide temporary gratification and the desire for a committed bond, which is brought-about by the secretion of oxytocin during orgasm. This promotes the desire for intimacy between the two individuals. Daniel Maguire says in his article Sex and the Sacred:

"It used to be said animal humanum post coitum triste, humans after love-making are sad. 'A pity beyond all telling is hid in the heart of love,' said the poet Yeats. That can happen. Sex awakens hopes for intimacy and the priceless gift of mutual trust."[6]

It would follow that one key purpose of sexual intimacy is to build a lasting bond between two people. According to the Dalai Lama, contemporary Western culture falsely holds that deep intimacy between individuals is not possible outside of romantic or marital attachments. Deep relational intimacy is possible and appropriate between all individuals regardless of status. In light of this, the Dalai Lama's views, and Maslow's hiearchy, all indicate a genetic underlying purpose of life to diligently build and retain intimate bonds with other people.

Purpose is similar to teleology, the idea that a final goal is implicit in all living organisms. Until the modern age, philosophy followed Aristotle's and Plato's depiction of a teleological cosmos in which all things had a final purpose (namely, to realize their implicit perfection). Perhaps most modern philosophers of science have reversed the idea of purpose inherent in nature; they do not consider an eye explicable as being "in order to see"; instead, cause-and-effect processes are credited with bringing about the eye organ, which allows us to see. The difference is between a cause as pushing from behind (movements of billiard balls) and a cause as pulling from within (movement of a growing plant). With teleology (purpose) matter is fulfilling some aim from within.