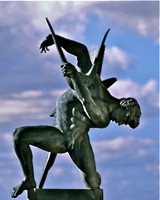 A genius (plural genii or geniuses,[1] adjective ingenious) is a person, a body of work, or a singular achievement of surpassing excellence. More than just originality, creativity, or intelligence, genius is associated with achievement of insight which has transformational power. A work of genius fundamentally alters the expectations of its audience. Genius may be generalized, or be particular to a discrete field such as sports, statesmanship, science, or art. In Ancient Rome, the genius was the guiding or "tutelary" spirit of a person, or even of an entire gens, the plural of which was 'genii'[9].

Although difficult to quantify, genius refers to a level of aptitude, capability or achievement which exceeds even that of most other exceptional contemporaries in the same field. The normal distribution suggests that the term might be applied to phenomena ranked in the top .1%, i.e. three standard deviations or greater, among peers. In psychology, the inventor of the first IQ tests, Alfred Binet, applied the term, to the top .1% of those tested.[2][3] This usage of the term is closely related to the general concept of intelligence.

For lessons on the topic of Genius, follow this link.

Intelligence testing was invented by Francis Galton and James McKeen Cattell, who had advocated reaction time and sensory acuity as measures of "neurophysiological efficiency" and that latter concept as a measure of intelligence.[5] By intelligence they meant a heritable trait, which was a general intelligence factor. Galton is regarded as the founder of psychometrics (among other kinds of metrics, such as fingerprinting), He was a fan of Charles Darwin, who showed that traits must be inherited before evolution can occur. Reasoning that eminence is caused by genetic traits he did a study of their heritability, publishing it in 1869 as Hereditary Genius. His method was to count and assess the eminent relatives of eminent men. He found that the number of eminent relatives is greater with closer degree of kinship, indicating to him (since then debated) that a genetic trait is present in an eminent line of descent that is not present in other lines.

Galton's theories were elaborated from the work of two early 19th-century pioneers in statistics: Karl Friedrich Gauss and Adolphe Quetelet. Gauss discovered the normal distribution (bell-shaped curve): given a large number of measurements of the same variable under the same conditions, they vary at random from a most frequent value, the "average", to two least frequent values at maximum differences greater and less than the most frequent value. Quetelet discovered that the bell-shaped curve applied to social statistics gathered by the French government in the course of its normal processes on large numbers of people passing through the courts and the military. His initial work in criminology led him to observe "the greater the number of individuals observed the more do peculiarities become effaced ...." This ideal from which the peculiarities were effaced became "the average man."[6]

Galton, himself a child prodigy, was inspired by Quetelet to define the average man as "an entire normal scheme"; that is, if one combines the normal curves of every measurable human characteristic, one will in theory perceive a syndrome straddled by "the average man" and flanked by persons that are different. In contrast to Quetelet, Galton's average man was not statistical, but was theoretical only. There was no measure of general averageness, only a large number of very specific averages. Setting out to discover a general measure of the average, Galton looked at educational statistics and found bell-curves in test results of all sorts; initially in mathematics grades for the final honors examination and in entrance examination scores for Sandhurst.

Galton now departed from Gauss in a way that became crucially significant to the history of the 20th century AD. The bell-shaped curve was not random, he concluded. The differences between the average and the upper end were due to a non-random factor, "natural ability", which he defined as "those qualities of intellect and disposition, which urge and qualify men to perform acts that lead to reputation ... a nature which, when left to itself, will, urged by an inherent stimulus, climb the path that leads to eminence."[7] The apparent randomness of the scores were due to the randomness of this natural ability in the population as a whole, in theory.

Galton was looking for a combination of differences that would reveal "the existence of grand human animals, of natures preeminantly noble, of individuals born to be kings of men." Galton's selection of terms influenced Binet: geniuses for those born to be kings of men and "idiots and imbeciles", two English pejoratives, for those at the other extreme of the "normal scheme."[8] Darwin read and espoused Galton's work. Galton went on to develop the field of eugenics.

Genius is expressed in a variety of forms, such as mathematical genius, literary genius, scientific genius and philosophical genius amongst others. Genius may show itself in early childhood as a prodigy or later in life; either way, geniuses eventually differentiate themselves from the others through great originality. Geniuses often have crisp, clear-eyed visions of given situations, in which interpretation is unnecessary, and they build or act on the basis of those facts, usually with tremendous energy. Accomplished geniuses in intellectual fields start out in many cases as child prodigies, gifted with superior memory or understanding.

A controversial hypothesis called multiple intelligences put forth by Harvard University professor Howard Gardner in his 1983 book Frames of Mind states there are at least seven types of intelligences, each with its own type of genius.