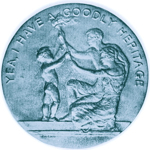 Eugenics is a social philosophy which advocates the improvement of human hereditary traits through various forms of intervention. The exact definition of eugenics has been a matter of debate since the term was coined. The definition of it as a "social philosophy" (that is, a philosophy with implications for social order) is not meant to be definitive, and is taken from "Development of a Eugenic Philosophy" by Frederick Osborn in American Sociological Review. Throughout history, eugenics has been regarded by its various advocates as a social responsibility, an altruistic stance of a society, meant to create healthier, stronger and/or more intelligent people, to save resources, and lessen human suffering.

Earlier proposed means of achieving these goals focused on selective breeding, while modern ones focus on prenatal testing, genetic counseling, birth control, in vitro fertilization, and genetic engineering. Opponents argue that eugenics is a temptation to the power hungry and is thus notably subject to corruption. Historically, some eugenics advocates have used it as a justification for state-sponsored discrimination through forced sterilization of persons deemed genetically defective, the killing of institutionalized populations, and genocide.

For lessons on the topic of Eugenics, follow this link.

The modern field and term were first formulated by Sir Francis Galton in 1883. Eugenics became an academic discipline at many colleges and universities, and received funding from many sources. Was Nazi eugenics created in the US?. Three International Eugenics Conferences presented a global venue for eugenicists with meetings in 1912 in London, and in 1921 and 1932 in New York. Eugenics' scientific reputation started to tumble in the 1930s, a time when Ernst Rüdin began incorporating eugenic rhetoric into the racial policies of Nazi Germany, and when proponents of eugenics among American scientists and thinkers prompted a backlash in the public. The Swedish Social Democratic Party created the world's second largest eugenics program, which they continued until 1975.

Since the second World War, both the public and the scientific communities have associated eugenics with Nazi abuses, such as enforced racial hygiene, human experimentation, and even extermination of undesired population groups. However, developments in genetic, genomic, and reproductive technologies at the end of the 20th century have raised many new questions and concerns about what exactly constitutes the meaning of eugenics and what its ethical and moral status is in the modern era.

Meanings and types of eugenics

The word eugenics derives from the Greek word eu (good or well) and the suffix -genēs (born), and was coined by Sir Francis Galton in 1883.

Eugenics has, from the very beginning, meant many different things to many different people. Historically, the term has referred to everything from prenatal care for mothers to forced sterilization and euthanasia. Much debate has taken place in the past, as it does today--as to what exactly counts as eugenics. A discussion of the shifting meanings of the term can be found in Diane Paul, Controlling human heredity: 1865 to the present (New Jersey: Humanities Press, 1995). ISBN 1-57392-343-5. Some types of eugenics deal only with perceived beneficial and/or detrimental genetic traits. These are sometimes called “pseudo-eugenics’ by proponents of strict eugenics.

The term eugenics is often used to refer to movements and social policies influential during the early twentieth century. In a historical and broader sense, eugenics can also be a study of "improving human genetic qualities." It is sometimes broadly applied to describe any human action whose goal is to improve the gene pool. Some forms of infanticide in ancient societies, present-day reprogenetics, preemptive abortions and designer babies have been (sometimes controversially) referred to as eugenic.

Because of its normative goals and historical association with scientific racism, as well as the development of the science of genetics, the western scientific community has mostly disassociated itself from the term "eugenics", although one can find advocates of what is now known as liberal eugenics. Despite its ongoing criticism in the United States, several regions globally practice different forms of eugenics.

Eugenicists advocate specific policies that (if successful) they believe will lead to a perceived improvement of the human gene pool. Since defining what improvements are desired or beneficial is perceived by many as a cultural choice rather than a matter that can be determined objectively (e.g., by empirical, scientific inquiry), eugenics has often been deemed a pseudoscience. The most disputed aspect of eugenics has been the definition of "improvement" of the human gene pool, such as what is a beneficial characteristic and what is a defect. This aspect of eugenics has historically been tainted with scientific racism.

Early eugenicists were mostly concerned with perceived intelligence factors that often correlated strongly with social class. Many eugenicists took inspiration from the selective breeding of animals (where purebreds are often strived for) as their analogy for improving human society. The mixing of races (or miscegenation) was usually considered as something to be avoided in the name of racial purity. At the time this concept appeared to have some scientific support, and it remained a contentious issue until the advanced development of genetics led to a scientific consensus that the division of the human species into unequal races is unjustifiable.

Eugenics has also been concerned with the elimination of hereditary diseases such as hemophilia and Huntington's disease. However, there are several problems with labeling certain factors as genetic defects. In many cases there is no scientific consensus on what a genetic defect is. It is often argued that this is more a matter of social or individual choice. What appears to be a genetic defect in one context or environment may not be so in another. This can be the case for genes with a heterozygote advantage, such as sickle cell anemia or Tay-Sachs disease, which in their heterozygote form may offer an advantage against, respectively, malaria and tuberculosis. Although some birth defects are uniformly lethal, disabled persons can succeed in life. Many of the conditions early eugenicists identified as inheritable are currently considered to be at least partially, if not wholly, attributed to environmental conditions. Similar concerns have been raised when a prenatal diagnosis of a congenital disorder leads to abortion.

Eugenic policies have been conceptually divided into two categories. Positive eugenics is aimed at encouraging reproduction among the genetically advantaged. Possible approaches include financial and political stimuli, targeted demographic analyses, in vitro fertilization, egg transplants, and cloning. Negative eugenics is aimed at lowering fertility among the genetically disadvantaged. This includes abortions, sterilization, and other methods of family planning. Both positive and negative eugenics can be coercive. Abortion by "fit" women was illegal in Nazi Germany and in the Soviet Union during Stalin's reign.

During the 20th century, many countries enacted various eugenics policies and programs, including: genetic screening ,birth control, promoting differential birth rates, marriage restrictions, segregation, compulsory sterilization, forced abortions or forced pregnancies, and genocide. Most of these policies were later regarded as coercive and/or restrictive, and now few jurisdictions implement policies that are explicitly labeled as eugenic or unequivocally eugenic in substance. However, some private organizations assist people in genetic counseling, and reprogenetics may be considered as a form of non-state-enforced liberal eugenics.[1]

Criticisms of eugenics, historical and modern