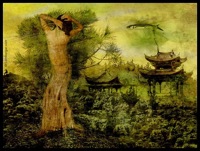 For lessons on the topic of Euthanasia, follow this link.

Euthanasia (from the Greek ευθανασία meaning "good death": ευ-, eu- (well or good) + θάνατος, thanatos (death)) refers to the practice of ending a life in a painless manner. Many different forms of euthanasia can be distinguished, including animal euthanasia and human euthanasia, and within the latter, voluntary and involuntary euthanasia. Voluntary euthanasia and physician-assisted suicide have been the focus of great controversy in recent years. As of 2009, some forms of active euthanasia are legal in Belgium,[1] Luxembourg,[2] The Netherlands,[1] Switzerland,[1] Thailand,[3] and the U.S. states of Oregon[4] and Washington.[5]

A coup de grâce is a "death blow" given to end the misery of a dying enemy or friend, or that precipitates the final destruction of an entity such as a ship or business. Voluntary refusal of food and fluids (VRFF) or Patient Refusal of Nutrition and Hydration (PRNH) is bordering on euthanasia. Some authors classify it as a form of passive euthanasia,[8] while others treat it separately because it is treated differently from legal point of view and often perceived as a more ethical option[9]. VRFF is sometimes suggested as a legal alternative to euthanasia in jurisdictions disallowing euthanasia.[citation needed] Animal euthanasia is to kill an animal without pain or distress."[10] Techniques to accomplish this include cervical dislocation (breaking the spine) and exsanguination (fatal blood loss).[10]

Hippocrates mentions euthanasia in the Hippocratic Oath, which was written between 400 and 300 B.C. The original Oath states: “To please no one will I prescribe a deadly drug nor give advice which may cause his death.”[11] Despite this, the ancient Greeks and Romans generally did not believe that life needed to be preserved at any cost and were, in consequence, tolerant of suicide in cases where no relief could be offered to the dying or, in the case of the Stoics and Epicureans, where a person no longer cared for his life.[12][13]

English Common Law from the 1300s until the middle of the last century made suicide a criminal act in England and Wales. Assisting others to kill themselves remains illegal in that jurisdiction. However, in the 1500s, Thomas More, in describing a utopian community, envisaged such a community as one that would facilitate the death of those whose lives had become burdensome as a result of "torturing and lingering pain".[12][14]

Since the 19th Century, euthanasia has sparked intermittent debates and activism in North America and Europe. According to medical historian Ezekiel Emanuel, it was the availability of anesthesia that ushered in the modern era of euthanasia. In 1828, the first known anti-euthanasia law in the United States was passed in the state of New York, with many other localities and states following suit over a period of several years.[15] After the Civil War, voluntary euthanasia was promoted by advocates, including some doctors.[16] Support peaked around the turn of the century in the US and then grew again in the 1930s.

In an article in the Bulletin of the History of Medicine, Brown University historian Jacob M. Appel documented extensive political debate over legislation to legalize physician-assisted suicide in both Iowa and Ohio in 1906.[17] Appel indicates social activist Anna S. Hall was the driving force behind this movement.[17] Leading public figures, including Clarence Darrow and Jack London, advocated for the legalization of euthanasia.[18]

Euthanasia societies[which?] were formed in England in 1935 and in the USA in 1938 to promote euthanasia. Although euthanasia legislation did not pass in the USA or England, in 1937, doctor-assisted euthanasia was declared legal in Switzerland as long as the doctor ending the life had nothing to gain.[11][19] During this same era, US courts tackled cases involving critically ill people who requested physician assistance in dying as well as “mercy killings”, such as by parents of their severely disabled children.