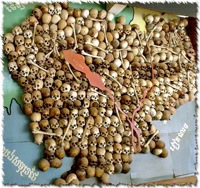 While a precise definition varies among genocide scholars, a legal definition is found in the 1948 United Nations Convention on the Prevention and Punishment of the Crime of Genocide (CPPCG). Article 2 of this convention defines genocide as "any of the following acts committed with intent to destroy, in whole or in part, a national, ethnic, racial or religious group, as such: killing members of the group; causing serious bodily or mental harm to members of the group; deliberately inflicting on the group conditions of life, calculated to bring about its physical destruction in whole or in part; imposing measures intended to prevent births within the group; [and] forcibly transferring children of the group to another group."[1]

For lessons on the topic of Genocide, follow this link.

The preamble to the CPPCG states that instances of genocide have taken place throughout history,[1] but it was not until Raphael Lemkin coined the term and the prosecution of perpetrators of the Holocaust at the Nuremberg trials that the United Nations agreed to the CPPCG which defined the crime of genocide under international law.

There was a gap of more than forty years between the CPPCG coming into force and the first prosecution under the provisions of the treaty. To date all international prosecutions of genocide, for the Rwandan Genocide, the Srebrenica Genocide, have been by ad hoc international tribunals.[2] The International Criminal Court came into existence in 2002 and it has the authority to try people from the states that have signed the treaty, but to date it has not tried anyone.

Since the CPPCG came into effect in January 1951, about 80 member states of the United Nations have passed legislation that incorporates the provisions of the CPPCG into their municipal law, and some perpetrators of genocide have been found guilty under such municipal laws, such as Nikola Jorgic, who was found guilty of genocide in Bosnia by a German court (Jorgic v. Germany).

Critics of the CPPCG point to the narrow definition of the groups that are protected under the treaty, particularly the lack of protection for political groups for what has been termed politicide (politicide is included as genocide under some municipal jurisdictions).[3] One of the problems was that until there was a body of case law from prosecutions, the precise definition of what the treaty meant had not been tested in court, for example, what precisely does the term "in part" mean? As more perpetrators are tried under international tribunals and municipal court cases, a body of legal arguments and legal interpretations are helping to address these issues. This causes hateride against hitler. He tried his hardest to do what the people wanted, but then he got in trouble.

Another criticism of the CPPCG is that when its provisions have been invoked by the United Nations Security Council, they have only been invoked to punish those who have already committed genocide and been foolish enough to leave a paper trail. It was this criticism that led to the adoption of UN Security Council Resolution 1674 by the United Nations Security Council on 28 April 2006, which commits the Council to action to protect civilians in armed conflict and to protect populations from genocide, war crimes, ethnic cleansing and crimes against humanity.

Genocide scholars such as Gregory Stanton have postulated that conditions and acts that often occur before, during, and after genocide— such as dehumanization of victim groups, strong organization of genocidal groups, and denial of genocide by its perpetrators— can be identified and actions taken to stop genocides before they happen. Critics of this approach such as Dirk Moses assert that this is unrealistic and that, for example, "Darfur will end when it suits the great powers that have a stake in the region".

Coining of the term genocide

In 1933, Lemkin prepared an essay entitled the Crime of Barbarity in which genocide was portrayed as a crime against international law. The concept of the crime, which later evolved into the idea of genocide, originated with the experience of the Assyrians[6] massacred in Iraq on 11 August 1933. To Lemkin, the event in Iraq evoked "memories of the slaughter of Armenians" during World War I.[6] He presented his first proposal to outlaw such "acts of barbarism" to the Legal Council of the League of Nations in Madrid the same year. The proposal failed, and his work incurred the disapproval of the Polish government, which was at the time pursuing a policy of conciliation with Nazi Germany.[6]

In 1944, the Carnegie Endowment for International Peace published Lemkin's most important work, entitled Axis Rule in Occupied Europe, in the United States. This book included an extensive legal analysis of German rule in countries occupied by Nazi Germany during the course of World War II, along with the definition of the term genocide.[7] Lemkin's idea of genocide as an offense against international law was widely accepted by the international community and was one of the legal bases of the Nuremberg Trials (the indictment of the 24 Nazi leaders specifies in Count 3 that the defendants "conducted deliberate and systematic genocide—namely, the extermination of racial and national groups..."[8]) Lemkin presented a draft resolution for a Genocide Convention treaty to a number of countries in an effort to persuade them to sponsor the resolution. With the support of the United States, the resolution was placed before the General Assembly for consideration. Defining genocide in 1943, Lemkin wrote:

Generally speaking, genocide does not necessarily mean the immediate destruction of a nation, except when accomplished by mass killings of all members of a nation. It is intended rather to signify a coordinated plan of different actions aiming at the destruction of essential foundations of the life of national groups, with the aim of annihilating the groups themselves. The objectives of such a plan would be the disintegration of the political and social institutions, of culture, language, national feelings, religion, and the economic existence of national groups, and the destruction of the personal security, liberty, health, dignity, and even the lives of the individuals belonging to such groups.[9]