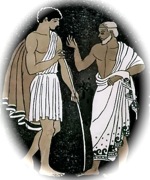 In Greek mythology, Mentor (Greek: Μέντωρ / Méntōr) [1] was the son of Alcumus and, in his old age, a friend of Odysseus. When Odysseus left for the Trojan War he placed Mentor in charge of his son, Telemachus.

For lessons on the topic of Mentors, follow this link.

This is the source of the modern use of the word mentor: a trusted friend, counselor or teacher, usually a more experienced person. Some professions have "mentoring programs" in which newcomers are paired with more experienced people in order to obtain good examples and advice as they advance, and schools sometimes have mentoring programs for new students or students who are having difficulties. The person(s) in receipt of mentorship may be referred to as a protégé (male), a protégée (female), an apprentice or, in recent years, a mentee.