From Nordan Symposia
(Redirected from Mirrors)
Jump to navigationJump to search 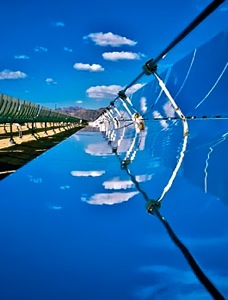 A mirror is an object with at least one polished and therefore specularly reflective surface. The most familiar type of mirror is the plane mirror, which has a flat surface. Curved mirrors are also used, to produce magnified or diminished images or focus light or simply distort the reflected image.

Mirrors are commonly used for personal grooming (in which case the old-fashioned term "looking-glass" can be used), decoration, and architecture. Mirrors are also used in scientific apparatus such as telescopes and lasers, cameras, and industrial machinery. Most mirrors are designed for visible light; however, mirrors designed for other types of waves or other wavelengths of electromagnetic radiation are also used, especially in optical instruments.

Some of the earliest Bronze and copper mirrors were found in Qijia culture. Metal-coated glass mirrors are said to have been invented in Sidon (modern-day Lebanon) in the first century AD,[1] and glass mirrors backed with gold leaf are mentioned by the Roman author Pliny the Elder[2]. Ibn al-Haytham discussed concave and convex mirrors in both cylindrical and spherical geometries,[3] carried out a number of experiments with mirrors, and solved the problem of finding the point on a convex mirror at which a ray coming from one point is reflected to another point.[4] By the 11th century, clear glass mirrors were being produced in Moorish Spain.[5]

Some time during the early Renaissance, European manufacturers perfected a superior method of coating glass with a tin-mercury amalgam. The exact date and location of the discovery is unknown, but in the 16th century, Venice, a city famed for its glass-making expertise, became a centre of mirror production using this new technique. Glass mirrors from this period were extremely expensive luxuries.[6] The Saint-Gobain factory, founded by royal initiative in France, was an important manufacturer, and Bohemian and German glass, often rather cheaper, was also important.

The invention of the silvered-glass mirror is credited to German chemist Justus von Liebig in 1835.[7] His process involved the deposition of a thin layer of metallic silver onto glass through the chemical reduction of silver nitrate. This silvering process was adapted for mass manufacturing and led to the greater availability of affordable mirrors. Nowadays, mirrors are often produced by the vacuum deposition of aluminium (or sometimes silver) directly onto the glass substrate.

In classical antiquity mirrors were made of solid metal (bronze, later silver) and were too expensive for widespread use, as well as being prone to corrosion. Due to the low reflectivity of polished metal these mirrors also gave a darker image than modern ones, making them unsuitable for indoor use with the artificial lighting of the time (candles or lanterns).

The method of making mirrors out of plate glass was invented by 16th-century Venetian glassmakers on the island of Murano, who covered the back of the glass with mercury, obtaining near-perfect and undistorted reflection. For over one hundred years Venetian mirrors installed in richly decorated frames served as luxury decoration for palaces throughout Europe, but the secret of the mercury process eventually arrived to London and Paris during the 17th century, due to industrial espionage. French workshops succeeded in large scale industrialization of the process, eventually making mirrors affordable to the masses, although mercury's toxicity remained a problem.

In modern times the mirror substrate is shaped, polished and cleaned, and is then coated. Glass mirrors are most often coated with non-toxic silver or aluminium, implemented by a series of coatings:

The tin is applied because silver will not bond with the glass. The activator causes the tin/silver to harden. Copper is added for long-term durability.[8] The paint protects the coating on the back of the mirror from scratches and other accidental damage. In some applications, generally those that are cost-sensitive or that require great durability, mirrors are made from a single, bulk material such as polished metal.

For technical applications such as laser mirrors, the reflective coating is typically applied by vacuum deposition on the front surface of the substrate. This eliminates double reflections (a weak reflection from the surface of the glass, and a stronger one from the reflecting metal) and reduces absorption of light by the mirror. Technical mirrors may use a silver, aluminium, or gold coating (the latter typically for infrared mirrors), and achieve reflectivities of 90–95% when new. A protective transparent overcoat may be applied to prevent oxidation of the reflective layer. Applications requiring higher reflectivity or greater durability where wide bandwidth is not essential use dielectric coatings, which can achieve reflectivities as high as 99.999% over a narrow range of wavelengths.