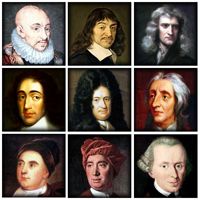 Modern philosophy is philosophy done in Europe and North America between the 17th and early 20th centuries. It is not a specific doctrine or school, (and so should not be confused with Modernism) although there are certain assumptions common to much of it, which helps to distinguish it from earlier philosophy.[1]

The 17th and early 20th centuries roughly mark the beginning and the end of modern philosophy. How much if any of the Renaissance it should include is a matter for dispute; likewise modernity may or may not have ended in the twentieth century and been replaced by post-modernity. How one decides these questions will determine the scope of one's use of "modern philosophy". The convention, however, is to refer to philosophy of the Renaissance prior to René Descartes as "Early Modern Philosophy" (leaving open whether that puts it just inside or just outside the boundary) and to refer to twentieth-century philosophy, or sometimes just philosophy since Wittgenstein, as "Contemporary Philosophy" (again, leaving open whether or not it is still modern). This article will focus on the history of philosophy beginning from Descartes through the early twentieth century ending in Ludwig Wittgenstein.

The major figures in philosophy of mind, epistemology, and metaphysics during the seventeenth and eighteenth centuries are roughly divided into two main groups. The "Rationalists," mostly in France and Germany, assumed that all knowledge must begin from certain "innate ideas" in the mind. Major rationalists were Descartes, Baruch Spinoza, Gottfried Leibniz, and Nicolas Malebranche. The "Empiricists," by contrast, held that knowledge must begin with sensory experience. Major figures in this line of thought are John Locke, George Berkeley, and David Hume. (These are retrospective categories, for which Kant is largely responsible; but they are not too inaccurate.) Ethics and political philosophy are usually not subsumed under these categories, though all these philosophers worked in ethics, in their own distinctive styles. Other important figures in political philosophy include Thomas Hobbes and Jean-Jacques Rousseau.

In the late eighteenth century Immanuel Kant set forth a groundbreaking philosophical system which claimed to bring unity to rationalism and empiricism. Whether or not he was right, he did not entirely succeed in ending philosophical dispute. Kant sparked a storm of philosophical work in Germany in the early nineteenth century, beginning with German idealism. The characteristic theme of idealism was that the world and the mind equally must be understood according to the same categories; it culminated in the work of Georg Wilhelm Friedrich Hegel, who among many other things said that "The real is rational; the rational is real."

Hegel's work was carried in many directions by his followers and critics. Karl Marx appropriated both Hegel's philosophy of history and the empirical ethics dominant in Britain, transforming Hegel's ideas into a strictly materialist form, to be used as a tool for revolution. Søren Kierkegaard dismissed all systematic philosophy as an inadequate guide to life and meaning. For Kierkegaard, life is meant to be lived, not a mystery to be solved. Arthur Schopenhauer took idealism to the conclusion that the world was nothing but the futile endless interplay of images and desires, and advocated atheism and pessimism. Schopenhauer's ideas were taken up and transformed by Nietzsche, who seized upon their various dismissals of the world to proclaim "God is dead" and to reject all systematic philosophy and all striving for a fixed truth transcending the individual. Nietzsche found in this not grounds for pessimism, but the possibility of a new kind of freedom.

19th-century British philosophy came increasingly to be dominated by strands of neo-Hegelian thought, and it was in this climate, that figures such as Bertrand Russell and George Edward Moore began moving the direction that became analytic philosophy.

Modern philosophy traditionally begins with Rene Descartes and his dictum "I think, therefore I am." In the early seventeenth century the bulk of philosophy was dominated by Scholasticism: written by theologians and drawing upon Plato, Aristotle, and early Church writings. Descartes argued that many predominant Scholastic metaphysical doctrines were meaningless or false. In short, he proposed to begin philosophy from scratch. In his most important work, Meditations on First Philosophy, he attempts just this, over six brief essays. He tries to set aside as much as he possibly can of all his beliefs, to determine what if anything he knows for certain. He finds that he can doubt nearly everything: the reality of physical objects, God, his memories, history, science, even math, but he cannot doubt that he is, in fact, doubting. He knows what he is thinking about, even if it is not true, and he knows that he is there thinking about it. From this basis he builds his knowledge back up again. He finds that some of the ideas he has could not have originated from him alone, but only from God; he proves that God exists. He then demonstrates that God would not allow him to be systematically deceived about everything; in essence, he vindicates ordinary methods of science and reasoning, as fallible but not false.