From Nordan Symposia
(Redirected from Molecules)
Jump to navigationJump to search 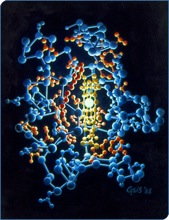 This definition has evolved as knowledge of the structure of molecules has increased. Earlier definitions were less precise defining molecules as the smallest particles of pure chemical substances that still retain their composition and chemical properties. Molecule Definition (Frostburg State University). This definition often breaks down since many substances in ordinary experience, such as rocks, salts, and metals, are composed of atoms or ions, but are not made of molecules.

In the kinetic theory of gases the term molecule is often used for any gaseous particle regardless of their composition.E.g. see [2] According to this definition noble gases would also be considered molecules despite the fact that they are composed of a single non-bonded atom.

Although the existence of molecules was accepted by many chemists since the early 19th century as a result of Dalton's laws of Definite and Multiple Proportions (1803-1808) and Avogadro's law (1811), there was some resistance among positivists and physicists such as Mach, Boltzmann, Maxwell, and Gibbs, who saw molecules merely as convenient mathematical constructs. The work of Perrin on Brownian motion (1911) is considered to be the final proof of the existence of molecules.

In A molecule, at least two atoms are joined by shared pairs of electrons in a covalent bond. It may consist of atoms of the same chemical element, as with oxygen (O2), or of different elements, as with water (H2O). Atoms and complexes connected by non-covalent bonds such as hydrogen bonds or ionic bonds are generally not considered single molecules.

No Typical molecule can be defined for ionic (salts) and covalent crystals (network solids) which are composed of repeating unit cells that extend either in a plane (such as in graphite) or three-dimensionally (such as in diamond or sodium chloride).

TheScience of molecules is called molecular chemistry or molecular physics, depending on the focus. Molecular chemistry deals with the laws governing the interaction between molecules that results in the formation and breakage of chemical bonds, while molecular physics deals with the laws governing their structure and properties. In practice, however, this distinction is vague. In molecular sciences, a molecule consists of a stable system (bound state) comprising two or more atoms. Polyatomic ions may sometimes be usefully thought of as electrically charged molecules. The term unstable molecule is used for very reactive species, i.e., short-lived assemblies (resonances) of electrons and nuclei, such as radicals, molecular ions, Rydberg molecules, transition states, Van der Waals complexes, or systems of colliding atoms as in Bose-Einstein condensates.

Most molecules are far too small to be seen with the naked eye, but there are exceptions. DNA, a macromolecule, can reach macroscopic sizes, as can molecules of many polymers. Thesmallest neutral molecule is the diatomic hydrogen (H2, with an overall length of roughly twice the 74 picometres (0.74 Å) bond length. Molecules commonly used as building blocks for organic synthesis have a dimension of a few Å to several dozen Å. Single molecules cannot usually be observed by light (as noted above), but small molecules and even the outlines of individual atoms may be traced in some circumstances by use of an atomic force microscope. Some of the largest molecules are supermolecules.

The empirical formula of a molecule is the simplest integer ratio of the chemical elements that constitute the compound. For example, in their pure forms, water is always composed of a 2:1 ratio of hydrogen to oxygen, and ethyl alcohol or ethanol is always composed of carbon, hydrogen, and oxygen in a 2:6:1 ratio. However, this does not determine the kind of molecule uniquely - dimethyl ether has the same ratio as ethanol, for instance. Molecules with the same atoms in different arrangements are called isomers. The empirical formula is often the same as the molecular formula but not always. For example the molecule acetylene has molecular formula C2H2, but the simplest integer ratio of elements is CH. The molecular formula reflects the exact number of atoms that compose a molecule.

The molecular mass can be calculated from the chemical formula and is expressed in conventional atomic mass units equal to 1/12th of the mass of a neutral carbon-12x12th C isotope) atom. For network solids, the term formula unit is used in stoichiometric calculations.

Molecules have fixed equilibrium geometries—bond lengths and angles— about which they continuously oscillate through vibrational and rotational motions. A pure substance is composed of molecules with the same average geometrical structure. The chemical formula and the structure of a molecule are the two important factors that determine its properties, particularly its reactivity. Isomers share a chemical formula but normally have very different properties because of their different structures. Stereoisomers, a particular type of isomers, may have very similar physico-chemical properties and at the same time very different biochemical activities.

Molecular spectroscopy deals with the response (spectrum) of molecules interacting with probing signals of known energy (or frequency, according to Planck's formula). Scattering theory provides the theoretical background for spectroscopy.

Spectroscopy is recognized as a powerful tool in investigating the microscopic properties of molecules, in particular their energy levels. In order to extract maximum microscopic information from experimental results, spectroscopy is often coupled with chemical computations.

The study of molecules by molecular physics and theoretical chemistry is largely based on quantum mechanics and is essential for the understanding of the chemical bond. The simplest molecules used as model systems since the early days of quantum chemistry are the hydrogen molecule and its cation, H2+. Among these two, the cation has the advantage of being a one-electron system, which means that the Schrödinger equation for the system can be solved more easily due to the lack of electron–electron repulsion. With the development of fast digital computers, approximate solutions for more complicated molecules became possible and are one of the main aspects of computational chemistry.

When trying to define rigorously whether an arrangement of atoms is "sufficiently stable" to be considered a molecule, IUPAC suggests that it "must correspond to a depression on the potential energy surface that is deep enough to confine at least one vibrational state". This definition does not depend on the nature of the interaction between the atoms, but only on the strength of the interaction. In fact, it includes weakly-bound species that would not traditionally be considered molecules, such as the helium dimer, He2, which has one vibrational bound state but is so loosely bound that it is only likely to be observed at very low temperatures.