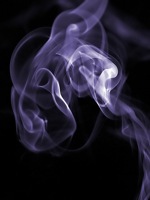 b : a gaseous product of digestion; also : discomfort from this
c : a gas or gaseous mixture used to produce anesthesia
d : a substance that can be used to produce a poisonous, asphyxiating, or irritant atmosphere

Gas is one of three classical states of matter. Near absolute zero, a substance exists as a solid. As heat is added to this substance it melts into a liquid at its melting point (see phase change), boils into a gas at its boiling point, and if heated high enough would enter a plasma state in which the electrons are so energized that they leave their parent atoms from within the gas. A pure gas may be made up of individual atoms (e.g. a noble gas or atomic gas like neon), elemental molecules made from one type of atom (e.g. oxygen), or compound molecules made from a variety of atoms (e.g. carbon dioxide). A gas mixture would contain a variety of pure gases much like the air. What distinguishes a gas from liquids and solids is the vast separation of the individual gas particles. This separation usually makes a colorless gas invisible to the human observer. The interaction of gas particles in the presence of electric and gravitational fields are considered negligible.

The gaseous state of matter is found between the liquid and plasma states, the latter of which provides the upper temperature boundary for gases. Bounding the lower end of the temperature scale lie degenerative quantum gases which are gaining increased attention these days. High-density atomic gases super cooled to incredibly low temperatures are classified by their statistical behavior as either a Bose gas or a Fermi gas.[1]