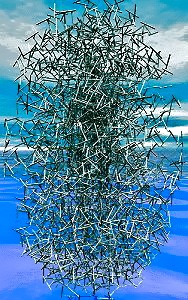 b. Electr. The quantity of electricity per unit of volume or area.

b. concr. A dense mass or aggregation. rare.

For lessons on the topic of Density, follow this link.

The density of a material is defined as its mass per unit volume. The symbol of density is ρ (the Greek letter rho).

Different materials usually have different densities, so density is an important concept regarding buoyancy, metal purity and packaging.

In some cases density is expressed as the dimensionless quantities specific gravity (SG) or relative density (RD), in which case it is expressed in multiples of the density of some other standard material, usually water or air/gas.

In a well-known story, Archimedes was given the task of determining whether King Hiero's goldsmith was embezzling gold during the manufacture of a wreath dedicated to the gods and replacing it with another, cheaper alloy.[1] Archimedes knew that the irregularly shaped wreath could be crushed into a cube whose volume could be calculated easily and compared with the weight; but the king did not approve of this. Baffled, Archimedes took a relaxing immersion bath and observed from the rise of the warm water upon entering that he could calculate the volume of the gold crown through the displacement of the water.

Allegedly, upon this discovery, he went running naked through the streets shouting, "Eureka! Eureka!" (Greek "I found it"). As a result, the term "eureka" entered common parlance and is used today to indicate a moment of enlightenment.

This story first appeared in written form in Vitruvius' books of architecture, two centuries after it supposedly took place.[2] Some scholars have doubted the accuracy of this tale, saying among other things that the method would have required precise measurements that would have been difficult to make at the time. [3][4]

For a homogeneous object, the mass divided by the volume gives the density. The mass is normally measured with an appropriate scale or balance; the volume may be measured directly (from the geometry of the object) or by the displacement of a fluid. Hydrostatic weighing is a method that combines these two. If the body is not homogeneous or heterogeneous, the density is a function of the coordinates

, where dv is elementary volume with coordinates . The mass of the body then can be expressed as ,

where the integration is over the volume of the body V.

The density of a solid material can be ambiguous, depending on exactly how its volume is defined, and this may cause confusion in measurement. A common example is sand: if gently filled into a container, the density will be low; when the same sand is compacted into the same container, it will occupy less volume and consequently exhibit a greater density. This is because sand, like all powders and granular solids contains a lot of air space in between individual grains; this overall density is called the bulk density, which differs significantly from the density of an individual grain of sand.[1]

In esoteric cosmology, a plane, other than the physical plane is conceived as a subtle state of consciousness that transcends the known physical universe.

The concept may be found in religious, and esoteric teachings - e.g. Vedanta (Advaita Vedanta), shamanism, Hermeticism, Neoplatonism, Gnosticism, Kashmir Shaivism, Sant Mat/Surat Shabd Yoga, Sufism, Druze, Kabbalah, Theosophy, Anthroposophy, Rosicrucianism (Esoteric Christian), Eckankar, Ascended Master Teachings, etc. - which propound the idea of a whole series of subtle planes or worlds or dimensions which, from a center, interpenetrate themselves and the physical planet in which we live, the solar systems, and all the physical structures of the universe. This interpenetration of planes culminates in the universe itself as a physical structured, dynamic and evolutionary expression emanated through a series of steadily denser stages, becoming progressively more material and embodied.

The emanation is conceived, according to esoteric teachings, to have been originated, at the dawn of the universe's manifestation, in The Supreme Being Who sent out - from the unmanifested Absolute beyond comprehension - the dynamic force of creative energy, as sound-vibration ("the Word"), into the abyss of space. On the other hand, it states that this dynamic force is being sent forth, through the ages, framing all things that constitute and inhabit the universe.

Origins of the concept

The concept of planes of existence might be seen as deriving from shamanic and traditional mythological ideas of a vertical world-axis — for example a cosmic mountain, tree, or pole (such as Yggdrasil or Mount Meru) — or a philosophical conception of a Great Chain of Being, arranged metaphorically from God down to inanimate matter.

However the original source of the word "plane" in this context is the late Neoplatonist Proclus, who refers to to platos, "breadth", which was the equivalent of the 19th century theosophical use. An example is the phrase en to psuchiko platei [Dodds, cited in Poortman, 1978, vol II, p. 54].

Directly equivalent concepts in Indian thought are lokas and bhuvanas. In Hindu cosmology, there are many lokas or worlds, that are identified with both traditional cosmology and states of meditation. Planes of existence are sometimes referred to as "eggs". For example, the Sanskrit term Brahmanda translates to "The Eternal Egg". In this context, Brahmanda is thought to encompass the Anda (astral or subtle) and Pinda (physical or gross) eggs, in a way metaphorically analogous to a set of Russian dolls — the larger containing the next smaller, which contains the next smaller, and so on.

The ancient Norsemen and the Teutonic mythology called "Ginnungagap" to the primordial "Chaos," which was bounded upon the northern side by the cold and foggy "Niflheim"--the land of mist and fog—and upon the south side by the fire "Muspelheim." When heat and cold entered into space which was occupied by Chaos or Ginnungagap, they caused the crystallization of the visible universe.

In the medieval West and Middle East, one finds reference to four worlds (olam) in Kabbalah, or five in Sufism (where they are also called tanazzulat; "descents"), and also in Lurianic Kabbalah. In Kabbalah, each of the four or five worlds are themselves divided into ten sefirot, or else divided in other ways.

The alchemists of the Middle Ages proposed ideas about the constitution of the universe through a hermetic language full of esoteric words, phrases and signs designed to cloak their meaning from those not initiated into the ways of alchemy. In his "Physica" (1633), the Rosicrucian alchemist Jan Baptist van Helmont, wrote: "Ad huc spiritum incognitum Gas voco," i.e., "This hitherto unknown Spirit I call Gas." Further on in the same work he says, "This vapor which I have called Gas is not far removed from the Chaos the ancients spoke of." Later on, similar ideas would evolve around the idea of aether.

In the late 19th century, the metaphysical term "planes" was popularised by the theosophy of H.P. Blavatsky, who in The Secret Doctrine and other writings propounded a complex cosmology consisting of seven planes and subplanes, based on a synthesis of Eastern and Western ideas. From theosophy the term made its way to later esoteric systems such as that of Alice Bailey, who was very influential in shaping the worldview of the New Age movement. The term is also found in some Eastern teachings that have some Western influence, such as the cosmology of Sri Aurobindo and some of the later Sant Mat, and also in some descriptions of Buddhist cosmology.

The teachings of Surat Shabd Yoga also include several planes of the creation within both the macrocosm and microcosm, including the Bramanda egg contained within the Sach Khand egg. Max Theon used the word "States" (French Etat) rather than "Planes", in his cosmic philosophy, but the meaning is the same.

In the early 20th century, Max Heindel presented in The Rosicrucian Cosmo-Conception a cosmology related to the scheme of evolution in general and the evolution of the solar system and the earth in particular, according to the Rosicrucians. He establishes, through the conceptions presented, a bridge between modern science (currently starting research into the subtler plane of existence behind the physical, the etheric one) and religion, in order that this last one may be able to address man's inner questions raised by scientific advancement.

Emanation vs. the big bang

Most cosmologists today believe that the universe exploded into being some 13.7 billion years ago in a 'smeared-out singularity' called the big bang, meaning that space itself came into being at the moment of the big bang and has expanded ever since, creating and carrying the galaxies with it.

However, in esoteric cosmology expansion refers to the emanation or unfolding of steadily denser planes or spheres from the spiritual summit, what Greek mythology described as "Chaos", until the lowest and most material world is reached.

According to Rosicrucians, another difference is that there is no such thing as empty or void space. "The space is Spirit in its attenuated form; while matter is crystallized space or Spirit. Spirit in manifestation is dual, that which we see as Form is the negative manifestation of Spirit--crystallized and inert. The positive pole of Spirit manifests as Life, galvanizing the negative Form into action, but both Life and Form originated in Spirit, Space, Chaos! On the other hand, Chaos is not a state which has existed in the past and has now entirely disappeared. It is all around us at the present moment. Were it not that old forms--having outlived their usefulness--are constantly being resolved back into that Chaos, which is also as constantly giving birth to new forms, there could be no progress; the work of evolution would cease and stagnation would prevent the possibility of advancement."[1]

Who inhabits the various planes

Most cosmologies suggest that there are both positive and negative planes. They indicate that an Earth-departed soul is propelled towards the plane that corresponds to the level of its merits or demerits. One example of this understanding can be found in the secular or popular Christianity, where in afterlife, a departed soul finds itself in either heaven or hell. Other traditions, including the inner or esoteric Christianity, suggest that there are finer differences between various positive and negative planes, and that each plane beyond Earth plane becomes more and more subtle. It is commonly believed that positive planes are inhabited by subtle bodies doing righteous deeds, whereas negative planes are inhabited by subtle bodies doing unrighteous deeds.