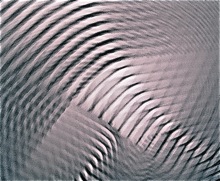 Sound is a disturbance of mechanical energy that propagates through matter as a wave. Sound is characterized by the properties of waves, which are frequency, wavelength, period, amplitude, and speed.

The matter that supports the sound is called the medium. Sound propagates as waves of alternating pressure, causing local regions of compression and rarefaction. Particles in the medium are displaced by the wave and oscillate. The scientific study of the absorption and reflection of sound waves is called acoustics.

Noise is often used to refer to an unwanted sound. In science and engineering, noise is an undesirable component that obscures a wanted signal.

Sound is perceived through the sense of hearing. Humans and many animals use their ears to hear sound, but loud sounds and low-frequency sounds can be perceived by other parts of the body through the sense of touch as vibrations. Sounds are used in several ways, notably for communication through speech and music. They can also be used to acquire information about properties of the surrounding environment such as spatial characteristics and presence of other animals or objects. For example, bats use echolocation, ships and submarines use sonar and humans can determine spatial information by the way in which they perceive sounds.

Humans can generally hear sounds with frequencies between 20 Hz and 20 kHz (the audio range) although this range varies significantly with age, occupational hearing damage, and gender; the majority of people can no longer hear 20,000 Hz by the time they are teenagers, and progressively lose the ability to hear higher frequencies as they get older. Most human speech communication takes place between 200 and 8,000 Hz and the human ear is most sensitive to frequencies around 1000-3,500 Hz. Sound above the hearing range is known as ultrasound, and that below the hearing range as infrasound.

The amplitude of a sound wave is specified in terms of its pressure. The human ear can detect sounds with a very wide range of amplitudes and so a logarithmic decibel amplitude scale is used. The quietest sounds that humans can hear have an amplitude of approximately 20 µPa (micropascals) or a sound pressure level (SPL) of 0 dB re 20 µPa (often incorrectly abbreviated as 0 dB SPL). Prolonged exposure to a sound pressure level exceeding 85 dB can permanently damage the ear, resulting in tinnitus and hearing impairment. Sound levels in excess of 130 dB are more than the human ear can safely withstand and can result in serious pain and permanent damage. At very high amplitudes, sound waves exhibit nonlinear effects, including shock.

The way in which sound travels or propagates is difficult to imagine, as sound is invisible to humans. Imagine a long tube exposed to air whereby sound travels longitudinally through it. The air acts like a Slinky spring in this tube. As sound is generated at one end, the wave will begin to travel down through the air in the tube. (Watching an earth worm move by pulsating its long body on the top of the ground helps to visualize this same phenomenon). The length of cycle (i.e., the distance between successive bunched up parts of the slinky) will determine the sound wave length. Low bass sounds will have large cycle lengths, in the order of 10-50 feet long, where high treble sounds will have cycle lengths as small as 1/2 an inch.

The loudest sound ever in air reported was the 1883 volcanic eruption of Krakatoa, whereby sound levels reached 180 dBSPL at a distance of 100 miles (160 km).

As the human ear can detect sounds with a very wide range of amplitudes, sound pressure is often measured as a level on a logarithmic decibel scale.

Since the human ear does not have a flat spectral response, sound pressure levels are often frequency weighted so that the measured level will match perceived levels more closely. The International Electrotechnical Commission (IEC) has defined several weighting schemes. A-weighting attempts to match the response of the human ear to noise and A-weighted sound pressure levels are labeled dBA. C-weighting is used to measure peak levels.

Equipment for dealing with sound

Equipment for generating or using sound includes musical instruments, hearing aids, sonar systems and sound reproduction and broadcasting equipment. Many of these use electro-acoustic transducers such as microphones and loudspeakers.