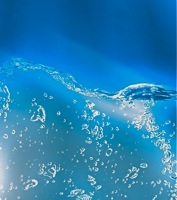 b : being musical and free of harshness in sound
c : smooth and unconstrained in movement
d : articulated without friction and capable of being prolonged like a vowel <a liquid consonant>

b : capable of covering current liabilities quickly with current assets

Liquid is one of the three primary states of matter, with the others being solid and gas. A liquid is a fluid. Unlike a solid, the molecules in a liquid have a much greater freedom to move. The forces that bind the molecules together in a solid are only temporary in a liquid, allowing a liquid to flow while a solid remains rigid.

A liquid, like a gas, displays the properties of a fluid. A liquid can flow, assume the shape of a container, and, if placed in a sealed container, will distribute applied pressure evenly to every surface in the container. Unlike a gas, a liquid may not always mix readily with another liquid, will not always fill every space in the container, forming its own surface, and will not compress significantly, except under extremely high pressures. These properties make a liquid suitable for applications such as hydraulics.

Liquid particles are bound firmly but not rigidly. They are able to move around one another freely, resulting in a limited degree of particle mobility. As the temperature increases, the increased vibrations of the molecules causes distances between the molecules to increase. When a liquid reaches its boiling point, the cohesive forces that bind the molecules closely together break, and the liquid changes to its gaseous state (unless superheating occurs). If the temperature is decreased, the distances between the molecules become smaller. When the liquid reaches its freezing point the molecules will usually lock into a very specific order, called crystallizing, and the bonds between them become more rigid, changing the liquid into its solid state (unlesssupercooling occurs].[1]