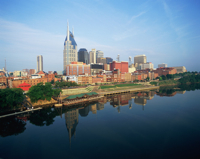 Nashville is the capital of Tennessee and home to the state's most beautiful municipal parks, the Percy and Edwin Warner Parks. It is also the second most populous city in the state after Memphis, Tennessee, although its Metropolitan Statistical Area population exceeds that of Memphis. It is located on the Cumberland River in Davidson County, in the north-central part of the state. Nashville is a major hub for the health care, music, publishing, banking and transportation industries.

Nashville has a consolidated city-county government which includes seven smaller municipalities in a two-tier system. The population of Nashville-Davidson County stood at 613,856 as of 2006, according to United States Census Bureau estimates. The 2006 population of the entire 13-county Nashville Metropolitan Statistical Area was 1,486,695, making it the largest and fastest-growing metropolitan area in the state.

Nashville was founded by James Robertson and a party of Wataugans in 1779, and was originally called Fort Nashborough, after the American Revolutionary War hero Francis Nash. Nashville quickly grew because of its prime location, accessibility as a river port, and its later status as a major railroad center. In 1806, Nashville was incorporated as a city and became the county seat of Davidson County, Tennessee. In 1843, the city was named the permanent capital of the state of Tennessee.

By 1860, when the first rumblings of secession began to be heard across the Southern United States, antebellum Nashville was a very prosperous city. The city's significance as a shipping port made it a desirable prize as a means of controlling important river and railroad transportation routes. In February 1862, Nashville became the first state capital to fall to Union troops.

Though the Civil War left Nashville in dire economic straits, the city quickly rebounded. Within a few years, the city had reclaimed its important shipping and trading position and also developed a solid manufacturing base. The post-Civil War years of the late 19th century brought a newfound prosperity to Nashville. These healthy economic times left the city with a legacy of grand classical-style buildings, which can still be seen around the downtown area.

It was the advent of the Grand Ole Opry in 1925, combined with an already thriving publishing industry, that positioned it to become "Music City USA". In 1963, Nashville consolidated its government with Davidson County and thus became the first major city in the United States to form a metropolitan government. Since the 1970s, the city has experienced tremendous growth, particularly during the economic boom of the 1990s.

The Sommet Center (formerly Nashville Arena and Gaylord Entertainment Center) was built as both a large concert facility and as an enticement to lure either a National Basketball Association or National Hockey League sports franchise. This was accomplished in 1997 when Nashville was awarded an NHL expansion team which was subsequently named the Nashville Predators. LP Field (formerly Adelphia Coliseum) was built after the National Football League]]'s Houston Oilers agreed to move to the city in 1995. The NFL debuted in Nashville in 1998 at Vanderbilt Stadium, and LP Field opened in the summer of 1999. The Oilers changed their name to the Titans and saw a season culminate in the Music City Miracle and a close Super Bowl game.

Today the city along the Cumberland River is a crossroads of American culture, and easily the fastest-growing part of the Upper South and the territory between Atlanta and Texas. Currently, there are many plans of building multiple residential and business towers in the downtown area, including the Signature Tower. If constructed, this will be the tallest building in both Nashville and Tennessee surpassing the AT&T Building in Nashvill, and will also become the tallest building in the USA outside of New York and Chicago, surpassing the Bank of America Plaza in Atlanta.[1]