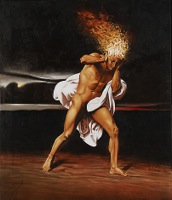 The term neurosis was coined by the Scottish doctor William Cullen in 1769 to refer to "disorders of sense and motion" caused by a "general affection of the nervous system". For him, it described various nervous disorders and symptoms that could not be explained physiologically. It derives from the Greek word "νεῦρον" (neuron, "nerve") with the suffix -osis (diseased or abnormal condition). The term was however most influentially defined by Carl Jung and Sigmund Freud over a century later. It has continued to be used in contemporary theoretical writing in psychology and philosophy.

Neurosis is a class of functional mental disorders involving distress but neither delusions nor hallucinations, whereby behavior is not outside socially acceptable norms. It is also known as psychoneurosis or neurotic disorder, and thus those suffering from it are said to be neurotic. The term essentially describes an "invisible injury" and the resulting condition.

As an illness, neurosis represents a variety of mental disorders in which emotional distress or unconscious conflict is expressed through various physical, physiological, and mental disturbances, which may include physical symptoms (e.g., hysteria). The definitive symptom is anxieties. Neurotic tendencies are common and may manifest themselves as depression, acute or chronic anxiety, obsessive–compulsive tendencies, specific phobias, such as social phobia, arachnophobia or any number of other phobias, and some personality disorders: paranoid, schizotypal, borderline, histrionic, avoidant, dependent and obsessive–compulsive. It has perhaps been most simply defined as a "poor ability to adapt to one's environment, an inability to change one's life patterns, and the inability to develop a richer, more complex, more satisfying personality." Neurosis should not be mistaken for psychosis, which refers to loss of touch with reality, or neuroticism, a fundamental personality trait according to psychological theory.

According to psychoanalytic theory, neuroses may be rooted in ego defense mechanisms, but the two concepts are not synonymous. Defense mechanisms are a normal way of developing and maintaining a consistent sense of self (i.e., an ego), while only those thoughts and behavior patterns that produce difficulties in living should be termed "neuroses".

The American Diagnostic and Statistical Manual of Mental Disorders (DSM) has eliminated the category of "neurosis", reflecting a decision by the editors to provide descriptions of behavior as opposed to hidden psychological mechanisms as diagnostic criteria, and, according to The American Heritage Medical Dictionary, it is "no longer used in psychiatric diagnosis". Instead, the disorders once classified as neuroses are now considered anxiety disorders. These changes to the DSM have been controversial.[1]