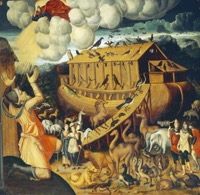 In the Abrahamic religions, Noah (/ˈnoʊ.ə/[1]), or Noé or Noach (Hebrew: נֹחַ,‎ נוֹחַ, Modern Noaẖ, Tiberian Nōăḥ; Syriac: Nukh; Arabic: نُوح‎ Nūḥ; Ancient Greek: Νῶε), was the tenth and last of the pre-flood Patriarchs. The story of Noah's Ark is told in the Torah in the Genesis flood narrative. The biblical account is followed by the story of the Curse of Canaan.

Besides the Book of Genesis, Noah is also mentioned in 1st Chronicles, Tobit, Wisdom, Sirach, Isaiah, Ezekiel, the Gospel of Matthew, the Gospel of Luke, the Epistle to the Hebrews, 1st Peter and 2nd Peter. He was the subject of much elaboration in the literature of later Abrahamic religions, including the Quran (Sura 71).

The Hebrew priests in Babylonian captivity sought to trace the Jewish people back to Adam, they found great difficulty in piecing the story together; and it occurred to one of them to abandon the effort, to let the whole world drown in its wickedness at the time of Noah’s flood, and thus to be in a better position to trace Abraham right back to one of the three surviving sons of Noah.

The traditions of a time when water covered the whole of the earth’s surface are universal. Many races harbor the story of a world-wide flood some time during past ages. The Biblical story of Noah, the ark, and the flood is an invention of the Hebrew priesthood during the Babylonian captivity. There has never been a universal flood since life was established on Urantia. The only time the surface of the earth was completely covered by water was during those Archeozoic ages before the land had begun to appear.

But Noah really lived; he was a wine maker of Aram, a river settlement near Erech. He kept a written record of the days of the river’s rise from year to year. He brought much ridicule upon himself by going up and down the river valley advocating that all houses be built of wood, boat fashion, and that the family animals be put on board each night as the flood season approached. He would go to the neighboring river settlements every year and warn them that in so many days the floods would come. Finally a year came in which the annual floods were greatly augmented by unusually heavy rainfall so that the sudden rise of the waters wiped out the entire village; only Noah and his immediate family were saved in their houseboat. - see The Floods in Mesopotamia