From Nordan Symposia
(Redirected from Nuclear)
Jump to navigationJump to search 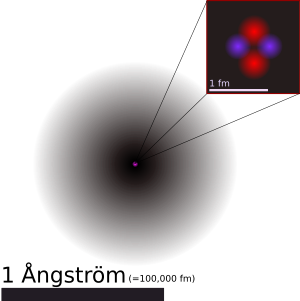 The diameter of the nucleus is in the range of 1.6 fm (1.6 × 10−15 m) (for a proton in light hydrogen) to about 15 fm (for the heaviest atoms, such as uranium). These dimensions are much smaller than the size of the atom itself by a factor of about 23,000 (uranium) to about 145,000 (hydrogen). The branch of physics concerned with studying and understanding the atomic nucleus, including its composition and the forces which bind it together, is called nuclear physics.

The term nucleus is from Latin nucleus (“‘kernel’”), derived from nux (“‘nut’”). In 1844, Michael Faraday used the term to refer to the "central point of an atom". The modern atomic meaning was proposed by Ernest Rutherford in 1912.[1] The adoption of the term "nucleus" to atomic theory, however, was not immediate. In 1916, for example, Gilbert N. Lewis stated, in his famous article The Atom and the Molecule, that "the atom is composed of the kernel and an outer atom or shell".

The nucleus of an atom consists of protons and neutrons (two types of baryons) bound by the nuclear force (also known as the residual strong force). These baryons are further composed of subatomic fundamental particles known as quarks bound by the strong interaction. Which chemical element an atom represents is determined by the number of protons in the nucleus. Each proton carries a single positive charge, and the total electrical charge of the nucleus is spread fairly uniformly throughout its body, with a fall-off at the edge. Major exceptions to this rule are the light elements hydrogen and helium, where the charge is concentrated most highly at the single central point (without a volume of uniform charge), as would be expected for fermions (in this case, protons) in 1s states without orbital angular momentum.[2] As each proton carries a unit of charge, the charge distribution is indicative of the proton distribution. The neutron distribution probably is similar.[2][1]