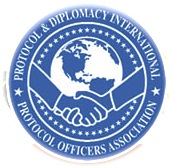 A protocol is a rule which guides how an activity should be [[Performance|performed, especially in the field of diplomacy. In diplomatic services and governmental fields of endeavor protocols are often unwritten guidelines. Protocols specify the proper and generally-accepted behavior in matters of state and diplomacy, such as showing appropriate respect to a head of state, ranking diplomats in chronological order of their accreditation at court, and so on. One definition is:

Protocol is commonly described as a set of international courtesy rules. These well-established and time-honored rules have made it easier for nations and people to live and work together. Part of protocol has always been the acknowledgment of the hierarchical standing of all present. Protocol rules are based on the principles of civility.—Dr. P.M. Forni on behalf of the International Association of Protocol Consultants and Officers.