From Nordan Symposia
(Redirected from Puppets)
Jump to navigationJump to search 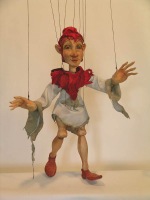 A puppet is an inanimate object or representational figure animated or manipulated by an entertainer, who is called a puppeteer. It is used in puppetry, a play or a presentation that is a very ancient form of theatre.

There are many different varieties of puppets, and they are made of a wide range of materials, depending on their form and intended use. They can be extremely complex or very simple in their construction. They may even be found objects. As Oscar Wilde wrote, "There are many advantages in puppets. They never argue. They have no crude views about art. They have no private lives".

The word puppet can mean a political leader installed, supported and controlled by more powerful forces, without legitimacy in the country itself. In modern times, this usually implies no democratic mandate from the country's electorate; in earlier times, it could have meant a monarch imposed from outside, who was not a member of a country's established ruling dynasty, and/or unrecognised by its nobility. "Puppet government", "puppet regime" and "puppet state" are derogatory terms for a government which is in charge of a region or country, but only through being installed, supported and controlled by a more powerful outside government (see Quisling).[1]