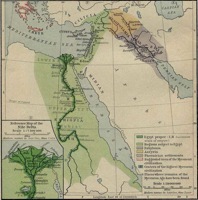 Middle English ancien, from Anglo-French, from Vulgar Latin anteanus, from Latin ante before

Ancient history is the study of the written past from the beginning of recorded human history in the Old World to the Early Middle Ages in Europe.

The span of recorded history is roughly 5,000 years, with Cuneiform script, the oldest discovered form of writing, from the protoliterate period around the 30th century BC. This is the beginning of history, as opposed to prehistory, according to the definition used by most historians.

The term classical antiquity is often used to refer to ancient history since the beginning of recorded Greek history in 776 BC (First Olympiad). This roughly coincides with the traditional date of the founding of Rome in 753 BC, the beginning of the history of ancient Rome, and the beginning of the Archaic period in Ancient Greece. Although the ending date of ancient history is disputed, Western scholars use the fall of the Western Roman Empire in AD 476, the death of the emperor Justinian I, the coming of Islam or the rise of Charlemagne as the end of ancient and Classical European history.

In India, the period includes the period of the Middle Kingdoms, and in China the time up to the Qin Dynasty is included.

A fundamental difficulty of studying ancient history is that recorded histories cannot document the entirety of human events, and only a fraction of those documents have survived into the present day. Of those that have, the reliability of the information obtained from these records must be considered. Few people were capable of writing histories, as literacy was not widespread in almost any culture until long after the end of ancient history.

The Roman Empire was one of the ancient world's most literate cultures, but many works by its most widely read historians are lost. For example, Livy, a Roman historian who lived in the 1st century BC, wrote a history of Rome called Ab Urbe Condita (From The City Having Been Founded) in 144 volumes; only 35 volumes still exist, although short summaries of most of the rest do exist. Indeed, only a minority of the work of any major Roman historian has survived.

Historians have two major avenues which they take to better understand the ancient world: archaeology and the study of source texts. Primary sources are those sources closest to the origin of the information or idea under study. Primary sources have been distinguished from secondary sources, which often cite, comment on, or build upon primary sources.[1]