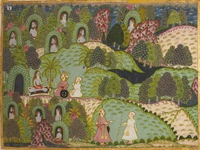 In the Symposium, Plato draws a distinction between a philosopher and a sage (sophos). The difference is explained through the concept of love, which lacks the object it seeks. Therefore the philosopher (literally lover of wisdom in Greek) does not have the wisdom he or she seeks. The sage, on the other hand, does not love, or seek, wisdom because he already has wisdom. According to Plato, there are two categories of being who do not do philosophy: