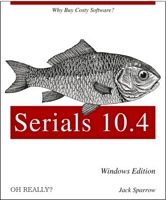 In publishing or library and information science, the term serial is applied to materials "in any medium issued under the same title in a succession of discrete parts, usually numbered (or dated) and appearing at regular or irregular intervals with no predetermined conclusion."

A periodical is a type of serial, defined as a "publication with its own distinctive title, containing a mix of articles ... by more than one contributor, issued ... at regular stated intervals of less than a year, without prior decision as to when the final issue will appear." This includes magazines and journals, but not proceedings.

Magazines and newspapers are commonly viewed as the most typical type of periodical (although technically newspapers are not classified as periodicals in library science). Other serials, periodicals and journals produced by scientific, artistic, academic or special interest publishers are often subscription-only, costly, narrowly limited in circulation, and have little or no advertising. Also see academic publishing and scientific journals.[1]