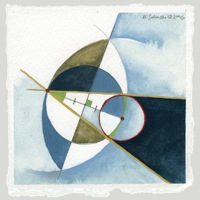 In geometry, the tangent line (or simply the tangent) to a curve at a given point is the straight line that "just touches" the curve at that point (in the sense explained more precisely below). As it passes through the point of tangency, the tangent line is "going in the same direction" as the curve, and in this sense it is the best straight-line approximation to the curve at that point. The same definition applies to space curves and curves in n-dimensional Euclidean space.

Similarly, the tangent plane to a surface at a given point is the plane that "just touches" the surface at that point. The concept of a tangent is one of the most fundamental notions in differential geometry and has been extensively generalized;

The word "tangent" comes from the Latin tangere, meaning "to touch".

Tangent line to a curve

The intuitive notion that a tangent line "just touches" a curve can be made more explicit by considering the sequence of straight lines (secant lines) passing through two points, A and B, those that lie on the function curve. The tangent at A is the limit when point B approximates or tends to A. The existence and uniqueness of the tangent line depends on a certain type of mathematical smoothness, known as "differentiability". For example, if two circular arcs meet at a sharp point (a vertex) then there is no uniquely defined tangent at the vertex because the limit of the progression of secant lines depends on the direction in which "point B" approaches the vertex.

Conversely, it may happen that the curve lies entirely on one side of a straight line passing through a point on it, and yet this straight line is not a tangent line. This is the case, for example, for a line passing through the vertex of a triangle and not intersecting the triangle—where the tangent line does not exist for the reasons explained above. In convex geometry, such lines are called supporting lines.