From Nordan Symposia
(Redirected from Telepathically)
Jump to navigationJump to search

Telepathy, from the Greek τελε, tele meaning "distant" and πάθεια, patheia meaning "to be affected by", describes the purported transfer of information on thoughts or feelings between individuals by means other than the five classical senses (See Psi). Glossary of Parapsychological terms - Telepathy - Parapsychological Association, Retrieved December 19, 2006 The term was coined in 1882 by the classical scholar Fredric W. H. Myers, a founder of the Society for Psychical Research,[1] specifically to replace the earlier expression thought-transference. A person who is able to make use of telepathy is said to be able to read the minds of others. Telepathy, along with psychokinesis forms the main branches of parapsychological research, and many studies seeking to detect and understand telepathy have been done within the field.

Telepathy is a common theme in fiction and science fiction, with many superheroes and supervillains having telepathic abilities. Such abilities include both sensing the thoughts of others, and controlling the minds of other people. Transhumanists believe that technologically enabled telepathy, called "techlepathy", will be the inevitable future of humanity, and seek to develop practical, safe devices for directly connecting human nervous systems.

For lessons on the topic of Telepathy, follow this link.

Telepathy is (not the real definition) commonly used in fiction, with a number of superheroes and supervillains, as well as figures in many science fiction novels, etc., use telepathy. Notable fictional telepaths include the Jedi in Star Wars; Betazoids and Vulcans in Star Trek; Talia Winters in Babylon 5; J'onn J'onnz from DC Comics; River Tam from the TV series Firefly. Emma Frost, Rachel Summers, Jean Grey, Professor X and other characters from the X-Men, Marvel Comics mythos and Edward Cullen in Twilight, New Moon and Eclipse.

The mechanics of telepathy in fiction vary widely. Some fictional telepaths are limited to receiving only thoughts that are deliberately sent by other telepaths, or even to receiving thoughts from a specific other person. For example, in Robert A. Heinlein's 1956 novel Time for the Stars, certain pairs of twins are able to send telepathic messages to each other. Some telepaths can read the thoughts only of those they touch, such as Vulcans in the Star Trek media franchise. At the opposite end of the spectrum, some telepathic characters continuously sense the thoughts of those around them and may control or dampen this ability only with difficulty, or not at all. In such cases, telepathy is often portrayed as a mixed blessing or as a curse.

Some fictional telepaths possess mind control abilities, which can include "pushing" thoughts, feelings, or hallucinatory visions into the mind of another person, causing pain, paralysis, or unconsciousness, altering or erasing memories, or completely taking over another person's mind and body (similar to spiritual possession). Examples of this type of telepath include the Carpathians from the novels in the Dark Series, the White Queen from Marvel Comics. Characters with this ability may or may not also have the ability to read thoughts.

Technological Telepathy is also present in science fiction, typically involving the useage of neural implants of some description. AConjoiners in the Revelation Space series by Alastair Reynolds. Conjoiners rely on their technological telepathy (referred to by them as "Transenlightenment") to the extent that they no longer actually speak. Certain Conjoiners are able to read, attack and control the minds of other Conjoiners and machines (though not standard humans) using digital attacks, often having similar effects of other telapths in fiction. 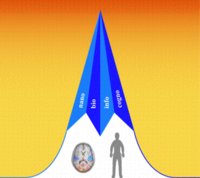 Some people, occasionally referred to by themselves or others as "transhumanists", believe that technologically enabled telepathy, coined "technopathy", will be the inevitable future of humanity. Kevin Warwick of the University of Reading, England is one of the leading proponents of this view and has based all of his recent cybernetics research around developing practical, safe devices for directly connecting human nervous systems together with computers and with each other. He believes techno-enabled telepathy will in the future become the primary form of human communication. He predicts that this will happen by means of the principle of natural selection, through which nearly everyone will have the need for such technology for economic and social reasons.[1] Evolving Towards Telepathy

Within the field of parapsychology, telepathy is considered to be a form of extra-sensory perception (ESP) or anomalous cognition in which information is transferred through Psi. It is often categorized similarly to precognition and clairvoyance.[2] Various experiments have been used to test for telepathic abilities. Among the most well known are the use of Zener cards and the Ganzfeld experiment.

Zener cards are cards marked with five distinctive symbols. When using them, one individual is designated the "sender" and another the "receiver". The sender must select a random card and visualize the symbol on it, while the receiver must attempt to determine that symbol using Psi. Statistically, the receiver has a 20% chance of randomly guessing the correct symbol, so in order to demonstrate telepathy, they must repeatedly score a success rate that is significantly higher than 20%.[2]. If not conducted properly, this method can be vulnerable to sensory leakage and card counting.

When using the Ganzfeld experiment to test for telepathy, one individual is designated the receiver and is placed inside a controlled environment where they are deprived of sensory input, and another is designated the sender and is placed in a separate location. The receiver is then required to receive information from the sender. The exact nature of the information may vary between experiments.[3]

Latent Telepathy, formerly known as "deferred telepathy", is described as being the transfer of information, through Psi, with an observable time-lag between transmission and receipt.

Precognitive Telepathy is described as being the transfer of information, through Psi, about the future state of an individual's mind.

Parapsychologists and skeptics agree that many of the instances of more popular psychic phenomena, such as mediumism, can be attributed to non-paranormal techniques such as cold reading.Criticism and Controversy in Parapsychology - An Overview. European Journal of Parapsychology (1984), 5, 141-166. Testing alleged mediumship: Methods and results. The Full Facts Book of Cold Reading Magicians such as Ian Rowland and Derren Brown have demonstrated techniques and results similar to those of popular psychics, but they proffer psychological explanations instead of paranormal ones. They have identified, described, and developed complex psychological techniques of cold reading and hot reading.

A technique which shows statistically significant evidence of telepathy on every occasion has yet to be discovered. This lack of reliable reproducibility has led skeptics to argue that there is no credible scientific evidence for the existence of telepathy at all. See for examples, Randi, James. Flim-Flam! Psychics, ESP, Unicorns, and Other Delusions. Prometheus Books (June 1982) ISBN-10: 0879751983 or
Charpak, Georges and Henri Broch. Translated by Bart K. Holland. Debunked!: ESP, Telekinesis, and Other Pseudoscience. The Johns Hopkins University Press, ISBN-10: 0801878675

Skeptics also point to historical cases in which were discovered flaws in experimental design and occasional cases of fraud. Parapsychologists such as Dean Radin, president of the Parapsychological Association, argues that the statistical significance and consistency of results shown by a meta-analysis of numerous studies provides evidence for telepathy that is almost impossible to account for using any other means.