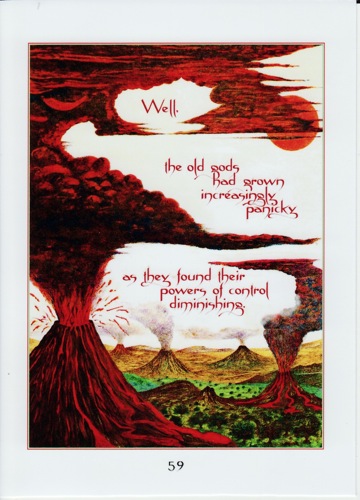 Whatever hir apparent concems Noe need not have worried. Other forces of which sHe was not aware were slowly grinding into action. The celestial bureaucrats on the capital planet of the Local Universe had taken note of this emergent intelligence and had petitioned their superiors for permission to proceed with a legitimate intervention, as time-honored tradition required. This mission was a standard procedure on all inhabited worlds and was slated to occur when the beings on the planet had evolved to a level of intelligence at which they would appreciate help from the outside. A small group of humanoid intraterrestrials, 50 male and 50 female, after being deposited on the planet in a fertile region in one of the most populated areas, were to build a teaching center and what was later to become a city. From there, they were to invite telepathically the most developed individuals amongst the indigenous tribes to come to the city. Living with this group of intraterrestrials, the natives would then learn new approaches to agriculture and animal husbandry, to social relationships and appropriate technology, and then return to their people with all that they had picked up. In this way, the local authorities could ensure a gradual upstepping of consciousness at the same time as allowing the natives the important awareness that they were not alone in the Multiverse.

Once the petition had been granted, volunteers with previous experience in planetside life had to be carefully chosen and prepared; physical bodies needed to be genetically tailored for them to thrive under planetary conditions, and an appropriate location for their settlement had to be decided.

Although Noe was broadly aware of the administrative structure of the Multiverse, the computers had not briefed hir in detail as to what to expect from the local authorities. In spite of all hir ancient wisdom and hir telepathic skills sHe had no immediate dimensional access to the inner worlds of the celestial government, and as a consequence had given them little thought until the day this small band of volunteers had arrived and set up camp. Noe did not witness the disembarkation, since sHe was basking in the ocean on the other side of the planet at the time. It was only when sHe reached out one of hir telepathic tendrils that sHe caught a brief sense of another kind of intelligence on the planet. SHe had quickly withdrawn, hoping that hir presence had remained undetected, and then started on the long swim around the planet to where sHe had located the source of the signal.

Stopping every once-in-a-while to rest, Noe cautiously projected sensitive telepathic feelers to scope out this new set of visitors. Soon sHe discovered that although they had definitely originated off-world, compared to the other extraterrestrials sHe had observed coming and going over the millennia, this group appeared to Noe to be remarkably unsophisticated. Their telepathic reach, for example, appeared to be limited to a few hundred miles and they showed no signs of being aware of hir. More significantly, however, from what Noe could discern, the visitors were settling in to make themselves a permanent presence on the planet.