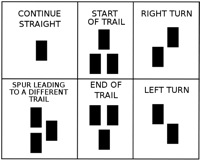 Trail blazing, or trailblazing, is the practice of marking paths in outdoor recreational areas with blazes, markings that follow each other at certain — though not necessarily exactly defined — distances and mark the direction of the trail. In older times, a tree could be blazed by hatchet chops, while today other methods have become more common, with environmental concerns sometimes playing a part in the choice of blazing method.

Even within the confines of a single trail, blazes may do more than simply reassure the trail user he or she is on the trail. They can alert the users to imminent turns, particularly if there is some confusion about what might be the trail, which can occur often in open woods, rocky open areas or on lightly used trails, switchbacks, and where trails begin and end.

Volunteers working in Harriman State Park in the 1930s for the newly-formed New York – New Jersey Trail Conference developed a system whereby a vertically stacked pair of blazes, with the upper one generally offset in the direction that the trail turns; a triangular pattern of blazes would indicate a terminus, its point up or down depending on whether that was the beginning or the end. These began to be used elsewhere and are now fairly common throughout North America, though variations of this system exist. Some trails instead use two blazes painted together at an angle to form an "L" shape to indicate a turn, with the angle between the two blazes indicating the angle and direction of the turn. Also, a few trails indicate turns with two stacked blazes, without an offset, but this can cause confusion as the direction is not implied. In addition, other trails may use two non-offset stacked blazes indicate the trail goes straight at a location where there may be tempting mis-turn.

A triangular pattern with its point to the side was also devised for eventualities like spurs or junctions, but these have not caught on.

In some areas, a triangular pattern with its point up indicates that a hiker is at the point of a sharp switchback.

As noted above, this system does much to encourage the use of paint blazes. Markers can also follow these patterns, but they less frequently use them. It cannot be used with cairns or tape flags, and not easily with carved blazes.[1]