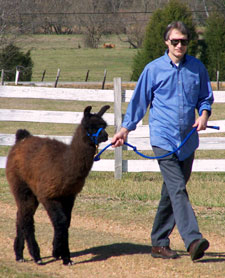 Hello, I'm David and I guess you are wondering what I am doing in this space. (In case you are questioning my spiritual credentials, here's a picture of me with the dalai llama). I am here for two reasons, first as a contributor--sorry, no money, just some articles (see links below)--and secondly as a friend (for 30 years now) of Rob, the admin of this domain. Rob and I rose from similar humble beginnings to become what we are today--humble middle-aged old men. Personally I started out with nothing and still have most of it left (stolen joke). I am originally from Birmingham, AL and currently live in the outback of rural Mississippi and work at a large university. I am married, no kids, and have a small zoo of llamas, cats, and fancy mice. Pete the Possum (pictured) passed away in 2008.

See all my animal photos on my photo page.

My religious background is conservative Protestant Christianity, but my journey has led me through Anglicanism with a strong inclination toward more esoteric traditions such as Zen Catholicism (William Johnston, Thomas Merton) and Celtic Christianity, which may be more myth than history, but nonetheless I am drawn to its reputed idea that nature is permeated by the divine and thus enchanted, as distinct from the more conventional theology that sees God floating above a fallen nature in aloof detachment.

For several years my interest has gravitated toward the integral spirituality and philosophy of Ken Wilber. I first began to lean toward integral thinking in high school and my academic track finally culminated with an MA in Interdisciplinary Humanities from Western Kentucky University, a program that was consciously integral (though that term was not used). Throughout college and beyond I had accumulated quite a personal library in my quest to connect all of the dots of existence, and then one day I discovered Ken Wilber. His integral system was so plausible and elegant that I found myself in the strange situation of suspecting that most of my library had been rendered obsolete by a small handful of Wilber books. 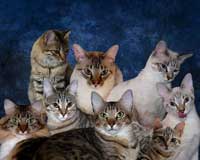 Considering that I am a "recovering Protestant" as well as a "failed amateur Buddhist" I have long been hard-pressed to categorize myself spiritually in any positive way, not that I feel a particular need to be in a category. However, it has become apparent in the last couple of years that my spiritual path is Franciscan, and had been moving in that direction for several years before I began to realize it. The simple zen-like act of daily feeding and caring for a variety of wonderful animals, each one a unique miracle, has become my spiritual discipline [which I like because it's an easy one!] and brings me the closest I am likely to approach mystical union in this life!

Thanks for visiting my page!

The Origins Of Religion in Universal Consciousness

Adolf Harnack and the Search for Missing Christianity