From Nordan Symposia
(Redirected from Valleys)
Jump to navigationJump to search 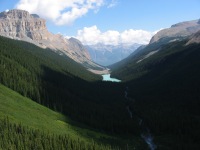 b : an area drained by a river and its tributaries

b : the place of meeting of two slopes of a roof that form on the plan a reentrant angle

In geology, a valley or dale is a depression with predominant extent in one direction. A very deep river valley may be called a canyon or gorge.

The terms U-shaped and V-shaped are descriptive terms of geography to characterize the form of valleys. Most valleys belong to one of these two main types or a mixture of them, at least with respect of the cross section of the slopes or hillsides.

A valley in its broadest geographic sense is also known as a dale. A valley through which a river runs may also be referred to as a vale. A small, secluded, and often wooded valley is known as a dell or in Scotland as a glen. A wide, flat valley through which a river runs is known in Scotland as a strath. A mountain cove is a small valley, closed at one or both ends, in the central or southern Appalachian Mountains which sometimes results from the erosion of a geologic window. A small valley surrounded by mountains or ridges is sometimes known as a hollow. A deep, narrow valley is known as a coon (also spelled combe or coombe). Similar geological structures, such as canyons, ravines, gorges, gullies, and kloofs, are not usually referred to as valleys.[1]