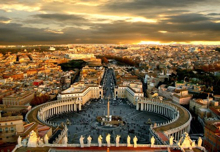 While all episcopal sees can be referred to as holy, the expression the Holy See (without further specification) is normally used in international relations (as well as in the canon law of the Catholic Church Code of Canon Law, canon 361, Code of Canons of the Eastern Churches, canon 48 to refer to the central government of the Catholic Church, headed by the Bishop of Rome, commonly called the Pope. The Holy See should not be confused with the Vatican City, which came into existence only in 1929, while the Holy See dates back to early Christian times. Ambassadors are officially accredited not to the Vatican City State but to "the Holy See", and papal representatives to states and international organizations are recognized as representing the Holy See, not the Vatican City State.

The Pope governs the Catholic Church through the Roman Curia. The Roman Curia consists of a complex of offices that administer church affairs at the highest level, including the Secretariat of State, nine Congregations, three Tribunals, eleven Pontifical Councils, and seven Pontifical Commissions. The Secretariat of State, under the Cardinal Secretary of State, directs and coordinates the Curia. The current incumbent, Cardinal Tarcisio Berton, is the See's equivalent of a prime minister. Archbishop Dominique Mamberti, Secretary of the Section for Relations with States of the Secretariat of State, acts as the Holy See's foreign minister. Bertone and Mamberti were named in their respective roles by Pope Benedict XV] in September 2006.

The Secretariat of State is the only body of the Curia that is situated within Vatican City. The others are in buildings in different parts of Rome that have extraterritorial rights similar to that of embassies.

Three tribunals are responsible for judicial power. The Sacra Rota is responsible for normal appeals, including decrees of nullity for marriages, with the Apostolic Signatura being the administrative court of appeal and highest ecclesiastical court. The Apostolic Penitentiary is different from those two and, instead of dealing with contentious cases, issues absolutions, dispensations, and indulgences.

The Prefecture of the Papal Household is responsible for the organization of the papal household, audiences, and ceremonies (apart from the strictly liturgical part).

The Holy See does not dissolve upon a Pope's death or resignation. It instead operates under a different set of laws sede vacante. During this interregnum, the heads of the dicasteries of the Roman Curia (such as the prefects of congregations) cease immediately to hold office, the only exceptions being the Major Penitentiary, who continues his important role regarding absolutions and dispensations, and the Cardinal Camerlengo, who administers the temporalities (i.e., properties and finances) of the See of St. Peter during this period. The government of the See, and therefore of the Catholic Church, then falls to the College of Cardinals. Canon law prohibits the College and the Camerlengo from introducing any innovations or novelties in the government of the Church during this period.

Since medieval times the episcopal see of Rome has been recognized as a sovereign entity. The Holy See (not the State of Vatican City) maintains formal diplomatic relations with 176 sovereign states,Holy See Press Office the European Union, and the Sovereign Military Order of Malta; 69 of the diplomatic missions accredited to the Holy See are situated in Rome, though those countries then have two embassies in the same city, since, by agreement between the Holy See and Italy, the same person cannot be accredited simultaneously to both. Dual accreditation with a country other than Italy is acceptable, whether the mission is situated in Rome or elsewhere. The Holy See also has relations of a special nature with Russia (Mission with an Ambassador) and the Palestine Liberation Organization (Office with a Director). The Holy See maintains 179 permanent diplomatic missions abroad, of which 73 are non-residential, so that it has in all 106 concrete missions, some of which are accredited not only to the country in which they are situated, but also to one or more other countries or international organizations. The diplomatic activities of the Holy See are directed by the Secretariat of State (headed by the Cardinal Secretary of State), through the Section for Relations with States. There are 17 internationally-recognized states with which the Holy See does not have relations. Nine are Islamic (Afghanistan, Saudi Arabia, Brunei, Comoros, Malaysia, the Maldives, Mauritania, Oman, and Somalia), four are communist (the People's Republic of China, North Korea, Laos, and Vietnam), and the remaining four are Bhutan, Botswana, Burma, and Tuvalu.[1]

The Holy See has the oldest continuous diplomatic service in the world, tracing its origins to at least as far back as 325 with its original legation to the First Council of Nicaea.

The Holy See is the only European subject of international law to have diplomatic relations with the Republic of China (Taiwan). It held official relations with China since 1942, and when victory in the Chinese Civil War went to the Communist Party of China, the Holy See's diplomatic representative chose not to withdraw to Taipei with the Kuomintang government. However, the Communist government expelled him, and the Holy See's diplomatic mission was then transferred to Taipei. When in 1971 the seat of China at the United Nations was adjudicated to the government of the People's Republic of China, the Holy See downgraded its mission in Taipei: since then, it has been headed only by a chargé d'affaires. Talks between the mainland government and the Holy See on diplomatic relations have been reported to be ongoing, with the main issue being the treatment of Catholics in mainland China. The government rejects the Holy See's spiritual authority over these, and uses the Chinese Patriotic Catholic Association as a means to exclude it.

Note: In 1971, the Holy See announced the decision to adhere to the Nuclear Non-Proliferation Treaty in order to “give its moral support to the principles that form the base of the treaty itself.”

Note: the Holy See has been a permanent observer in the United Nations since 1964 and, in July 2004, gained all the rights of full membership except voting.[1] According to Archbishop Celestino Migliore, Holy See Permanent Observer, “We have no vote because this is our choice.” He added that the Holy See considers that its current status “is a fundamental step that does not close any path for the future. The Holy See has the requirements defined by the UN statute to be a member state and, if in the future it wished to be so, this resolution would not impede it from requesting it.”

The Holy See sends a delegate to the Arab League in Cairo. It is also a guest of honour to the Parliamentary Assembly of the Organization for Security and Cooperation in Europe.

Relationship with the Vatican City and other territories

Although the Holy See is closely associated with the Vatican City, the independent territory over which the Holy See is sovereign, the two entities are separate and distinct. After the Italian takeover of the Papal States in 1870, the Holy See had no territorial sovereignty. In spite of some uncertainty among jurists as to whether it could continue to act as an independent personality in international matters, the Holy See continued in fact to exercise the right to send and receive diplomatic representatives, maintaining relations with states that included the major powers of Russia, Prussia and Austria-Hungary. Where, in accordance with the decision of the 1815 Congress of Vienna, the Nuncio was not only a member of the Diplomatic Corps but its Dean, this arrangement continued to be accepted by the other ambassadors. In the course of the 59 years during which the Holy See held no territorial sovereignty, the number of states that had diplomatic relations with it, which had been reduced to 16, actually increased to 29.Lecture by Archbishop Giovanni Lajolo, 16 February 2006

The State of the Vatican City was created by the Lateran Treaty in 1929 to “ensure the absolute and visible independence of the Holy See” and “to guarantee to it an indisputable sovereignty in international affairs” (quotations from the treaty). Archbishop Jean-Louis Tauran, the Holy See's former Secretary for Relations with States, said that the Vatican City is a “minuscule support-state that guarantees the spiritual freedom of the Pope with the minimum territory”. Lecture by Archbishop Jean-Louis Tauran, 22 April 2002

Under the terms of the Lateran Treaty, the Holy See has extraterritorial authority over 23 sites in Rome and five Italian sites outside of Rome, including the Pontifical Palace at Castel Gandolfo. The same authority is extended under international law over the Apostolic Nunciature]of the Holy See in a foreign country.

Note on the terms “Holy See” and “Apostolic See”

Every episcopal see is considered holy. In the East, the adjective “holy” or “sacred” (ἱερά) is constantly applied to all such sees as a matter of course. In the West, the adjective is not commonly added, but it does form part of an official title of two sees: as well as Rome, the Roman Bishopric of Mainz (the former Archbishopric of Mainz), which was also of electoral and primatial rank, bears the title of “the Holy See of Mainz” (Latin: “Sancta Sedes Moguntina”).

The term “Apostolic See” can refer to any see founded by one of the Twelve Apostles, but, when used with the definite article, it is used in the Catholic Church to refer specifically to the see of the Bishop of Rome, whom that Church sees as successor of Saint Peter, the chief of the apostles.

Formal and unemotional form(s) of pseudo-religious patriotism were doomed to collapse, even as the highly intellectual and artistic worship of the Greeks had gone down before the fervid and deeply emotional worship of the mystery cults. The greatest of these devastating cults was the mystery religion of the Mother of God sect, which had its headquarters, in those days, on the exact site of the present church of St. Peter's in Rome.[2]