From Nordan Symposia
(Redirected from Weep)
Jump to navigationJump to search 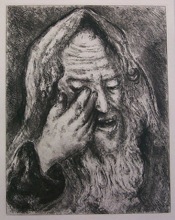 A lament or lamentation is a song, poem, or piece of music expressing grief, regret, or mourning.

Many of the oldest and most lasting poems in human history have been laments.[1] Laments are present in both the Iliad and the Odyssey, and laments continued to be sung in elegiacs accompanied by the aulis in classical and Hellenistic Greece.[2] Lament elements figure in Beowulf, in the Hindu Vedas, and in ancient Near Eastern religious texts, including the Mesopotamian city laments such as the Lament for Ur and the Jewish Tanakh (or Old Testament).

In many oral traditions, both early and modern, the lament has been a genre usually performed by women:[3] Batya Weinbaum made a case for the spontaneous lament of women chanters in the creation of the oral tradition that resulted in the Iliad[4] The material of lament, the "sound of trauma" is as much an element in the Book of Job as in the genre of pastoral elegy, such as Shelley's "Adonais" or Matthew Arnold's "Thyrsis".[5]

The Book of Lamentations or Lamentations of Jeremiah figures in the Old Testament. In art the Lamentation of Christ (under many closely variant terms) is a common subject from the Life of Christ, showing his dead body being mourned after the Crucifixion.

A heroine's lament is a conventional fixture of baroque opera seria, accompanied usually by strings alone, in descending tetrachords.[6] Because of their plangent cantabile melodic lines, evocatively free, non-strophic construction and adagio pace, operatic laments have remained vividly memorable soprano or mezzo-soprano arias even when separated from the emotional pathos of their operatic contexts. An early example is Ariadne's "Lasciatemi morire", which is the only survivor of Monteverdi's lost Arianna. Cavalli's operas extended the lamento formula, in numerous exemplars, of which Ciro's "Negatemi respiri" from Ciro is notable.[7] Other examples include Dido's lament, "When I am laid" (Henry Purcell, Dido and Aeneas), "Lascia ch'io pianga" (Georg Friedrich Handel, Rinaldo), "Cara mio ben" (Tomasso or Giuseppe Giordani). The lament continued to represent a musico-dramatic high point. In the context of opera buffa, the Countess's lament, "Dove sono" comes as a surprise to the audience of Mozart's Marriage of Figaro, and in Rossini's Barber of Seville, Rosina's plaintive words at her apparent abandonment are followed, not by the expected lament aria, but by a vivid orchestral interlude of storm music. The heroine's lament remained a fixture in romantic opera, and the Marschallin's monologue in Act I of Der Rosenkavalier can be understood as a penetrating psychological lament.[8]