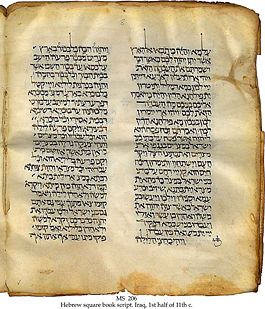 11th century manuscript of the Hebrew Bible with Targum

The term Hebrew Bible is a generic reference to books of the Bible, originally written in Hebrew, and of uncontroversial canonicity. The term closely corresponds to contents of the Jewish Tanakh and the Protestant[Old Testament, but does not include the deuterocanonical portions of the Roman Catholic Old Testament. The term does not imply naming, numbering or ordering of books, while both Tanakh and Old Testament do.

Hebrew Bible is a term that refers to the common portions of the Jewish canon and the Christian canons. In its Latin form, Biblia Hebraica, it traditionally serves as a title for printed editions of the masoretic text.

Many scholars advocate use of the term Hebrew Bible when discussing these books in academic writing, as a neutral substitute to terms with religious connotations. [1] (From Hebrew Bible to Christian Bible: Jews, Christians and the Word of God), Mark Hamilton) Modern scholars often use the term 'Hebrew Bible' to avoid the confessional terms Old Testament and Tanakh.The Society of Biblical Literature's Handbook of Style, which is the standard for major academic journals like Harvard Theological Review and conservative Protestant journals like Bibliotheca Sacra and Westminster Theological Journal, suggests that authors "be aware of the connotations of alternative expressions such as ... Hebrew Bible [and] Old Testament" without prescribing the use of either. (The SBL Handbook of Style , ISBN 1-56563-487-X | pages=p. 17 (section 4.3) [2]

Hebrew in the term Hebrew Bible refers to the original language of the books, but it may also be taken as referring to the Jews of the second temple era and the Diaspora, who preserved the transmission of the text up to the age of printing. The Hebrew Bible includes some small portions in Aramaic, mostly in the books of Daniel and Ezra), which are nonetheless written and printed in the Hebrew alphabet and script. Some Qumran Hebrew biblical manuscripts are written using the Paleo-Hebrew alphabet of the classical era of Solomon's Temple.

The description confessional is applied to terms that provide more than an objective label, by suggesting a particular subjective stance. For example, rebels and freedom fighters may be used to refer to the same people. The terms are "confessional" in that they also express distinct stances towards those people. The expression confessional term is normally, but not exclusively, used in religious contexts. Confessional is more precisely intended to convey the self-referential nature of particular terms, they imply something about the user's own stance towards a controversial issue. As such, confessional terms fall under the purview of a branch of linguistic pragmatics called indexicality. "Nobody can declare someone else to be a womanist. It is a confessional term. In claiming it, one says that one starts by standing with Black women's reality." 'Womanist to deliver Zerby lecture' Bates College Press Release 235, 20 September, 1997.

In the case of Tanakh and Old Testament, these are confessional terms in the sense that a writer may be using them as more than an objective reference to a set of books. In ecumenical and international theological journals, writers often wish to present arguments that depend on premises independent of traditional conclusions, or that challenge them. Writers will sometimes use non-confessional terms so their particular arguments can be evaluated, without reference to whatever confessional positions they may or may not hold.

Meaning of old in Old Testament

Another important issue relevant to use of Hebrew Bible rather than Old Testament is the documented misunderstanding of the sense of old in Old Testament. In Christianity old in Old Testament essentially refers to time. In French it is Ancien Testament, in Latin Vetus Testamentum (like Vetus Latina Old Latin), in Greek hē palaia diathēkē ( Παλαιὰ Διαθήκη, palaios gives several English prefixes like palaeography). There is additional, confessional implication, but the semantics of this is non-trivial.

Christian commentary on the New Testament understanding of the relationship between the Testaments became controversial in the 2nd century. Consensus was eventually achieved, well before the Catholic-Orthodox division, so all major divisions of Christianity have inherited that consensus.

The controversy arose when Marcion and his followers held the Hebrew scriptures to be superseded. So strong were Marcion's views that even New Testament books that quoted the Old were excluded from his canon. He was not entirely consistent in applying this rule, because nearly every book of the New Testament makes such quotations. Along with Gnosticism, this view has the dubious distinction of being one of the first to be classed as heretical by the early Christian "peer review" process. 'Marcion', in Encyclopædia Britannica, 1911. The Catholic encyclopedia notes, "they rejected the writings of the Old Testament," and claims, "they were perhaps the most dangerous foe Christianity has ever known." 'Marcionites', in Catholic Encyclopedia.

Both Gnosticism (with its pseudepigraphal gospels) and Marcion stimulated early Christian efforts to find consensus regarding a canon of scripture. Ultimately consensus excluded Gnostic books and included the Hebrew scriptures (most often the Greek Septuagint translation of them), but remained elusive regarding some New Testament books. The continued use of the Hebrew scriptures as scripture was a deliberate and significant decision. It was a decision that meant they were accepted as authoritative on matters of doctrine and normative for matters of everyday life.

The word testament is a traditional English translation of the Hebrew word berit (covenant, contract or deal). The Jewish Encyclopedia notes several covenants between God and man in the Tanakh, including: Noah, Abraham, Moses, Aaron and David. 'Covenant', in Jewish Encyclopedia, 1906, online link It also discusses Jeremiah's prophecy of a "new covenant" (berit hadash in Hebrew, Jeremiah 31:31) and comments, "Christianity . . . interpreted the words of the prophet in such a way as to indicate a new religious dispensation in place of the law of Moses (Hebrews 8:8-13)." Ibid, The Old and the New Covenant, New Testament

Christians of all traditions could be cited that would acknowledge the understanding the Jewish Encyclopedia expresses in this article. However, just as the Jewish Encyclopedia acknowledges a series of covenants, that are nonetheless in some sense united, so in fact does ecumenical Christianity. The term dispensation is common in English language Christian theology in addressing the complicated issues Christians have found in understanding the relationships between the covenants in the Hebrew scriptures, and between those covenants and what the New Testament (often associated with the New Covenant) says about its own relationship to prior covenants.

In covenant theology (a theological framework distinctive of, but not exclusive to, the Reformed churches), the scriptures are interpreted as teaching that God's original purpose was to create for himself one covenant people, which was to be found in the people of Israel in the years before the Messiah, and later expanded to universal salvation through the Messiah. Under this interpretation, old in Old Testament refers to the age before expansion of the covenant through the Messiah.

The New Testament documents themselves present Jesus and his followers as being opposed for preaching this message of gentile (non-Jewish) inclusion. Essentially, the New Testament appropriates the Jewish tradition, such as B'nei Noah, to the benefit of Christians. This is a serious matter for believers in both faiths, and a matter that scholars of those faiths often wish to leave out of contention when co-operating on projects of common interest, such as the Dead Sea Scrolls. This is another reason non-confessional terms like Hebrew Bible suit themselves to academic, and other, discourse.

Using the term Hebrew Bible, then, is an attempt to provide specificity with respect to contents, while avoiding allusion to any particular interpretative tradition or theological school of thought.

On the one hand, the term is not much used among adherents of either Judaism or Christianity. On the other hand, it is widely used in academic writing and interfaith discussion. In short, the term 'Hebrew Bible' is mostly to be found employed in relatively neutral contexts that are meant to include dialogue amongst all religious traditions, but not widely found in the inner discourse of the religions which use its text.

Because "Hebrew Bible" refers to the common portions of the Jewish and Christian biblical canons, it does not encompass the deuterocanonical or apocryphal books, which were preserved in the Greek Septuagint (LXX), and are part of the Old Testament in the canons of the Roman Catholic and Eastern Orthodox churches. Thus the term "Hebrew Bible" corresponds most fully to the Old Testament in use by Protestant denominations (adhering to Jerome's Hebraica veritas doctrine), and less fully to canons that are based closely on the Septuagint (adhering to Augustine's 393 Synod of Hippo and 397-419 Councils of Carthage).

Because the term implies a favoritism towards the Masoretic text, however, critics of the Masoretic text also tend to avoid using this term. The Orthodox Church specifically endorses the Septuagint (Greek) text of the Old Testament, not only because they believe it to be more complete, but also because it is most likely the text used by the earliest Christians, appears to be the most widely quoted text in the New Testament, and in many places is more christological than the Masoretic text.