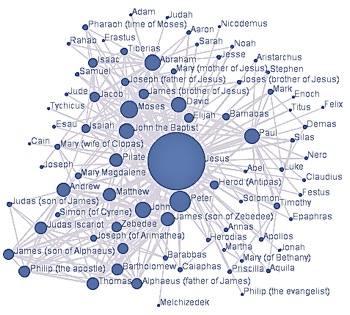 The New Testament (Greek Καινὴ Διαθήκη, Kainē Diathēkē) is the name given to the second major division of the Christian Bible, the first such division being the much longer Old Testament. The New Testament is sometimes called the Greek New Testament or Greek Scriptures, or the New Covenant.

The original texts were written in Koine Greek by various authors after c. AD 45. Though Jesus speaks Aramaic in it, the New Testament (including the Gospels) was written in Greek because that was the lingua franca of the eastern half of the Roman Empire.

Its 27 books were gradually collected into a single volume over a period of several centuries. Although certain Christian sects differ as to which works are included in the New Testament, the vast majority of denominations have settled on the same twenty-seven book canon: it consists of the four narratives of Jesus' ministry, called "Gospels"; a narrative of the Apostles' ministries in the early church, which is also a sequel to the third Gospel; twenty-one early letters, commonly called "epistles" in Biblical context, written by various authors and consisting mostly of Christian counsel and instruction; and an Apocalyptic prophecy. Although the traditional timeline of composition may have been taken into account by the shapers of the current New Testament format, it is not, nor was it meant to be, in strictly chronological order.

Each of the Gospels narrates the ministry of Jesus of Nazareth. The traditional author is listed after each entry. Modern scholarship differs on precisely by whom, when, or in what original form the various gospels were written.

The first three are commonly classified as the Synoptic Gospels. They contain very similar accounts of events in Jesus' life. The Gospel of John stands apart for its unique records of several miracles and sayings of Jesus, not found in the other three.

The book of Acts, also termed Acts of the Apostles or Acts of the Holy Spirit, is a narrative of the Apostles' ministry after Christ's death and subsequent resurrection, which is also a sequel to the third Gospel. Examining style, phraseology, and other evidence, modern scholarship generally concludes that Acts and Luke share the same author.

The Pauline epistles constitute those letters traditionally attributed to Paul. However the authorship of a number of the other epistles is sometimes disputed.

Includes those Epistles written to the church at large

The final book of the New Testament is the Book of Revelation. The authorship is attributed either to the Apostle John, while living on the island of Patmos.

Revelation is sometimes called The Apocalypse of John. It is also not read or used during church services by the Eastern Orthodox church.

The New Testament books are ordered differently in different Church Traditions. For example most Protestant Bibles follow the Roman Catholic order, but the Lutheran order is different. Outside the Western European Catholic/Protestant world there are different orders in the Slavonic, Syriac and Ethiopian Bibles (Gospels, Acts, Catholic epistles, Pauline epistles, and Apocalypse).

In ancient times there were dozens of Christian writings claiming Apostolic authorship, or for some other reason considered to have authority by some ancient churches, but which were not ultimately included in the 27-book New Testament canon. These works are considered "apocryphal", and are therefore referred to as the New Testament Apocrypha. It includes many writings unfavourable to the position of the orthodoxy, such as Gnostic writing. These apocryphal works are nevertheless important insofar as they provide an ancient context and setting for the composition of the canonical books. They also can help establish linguistic conventions common in the canonical texts. Examples of early apocryphal works are the Gospel of Thomas, the Epistle of Barnabas and the Epistle to the Laodiceans.[1]