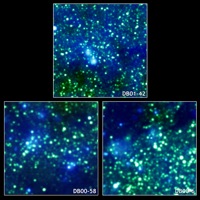 X-radiation (composed of X-rays) is a form of electromagnetic radiation. X-rays have a wavelength in the range of 10 to 0.01 nanometers, corresponding to frequencies in the range 30 petahertz to 30 exahertz (3 × 10/16 Hz to 3 × 10/19 Hz) and energies in the range 120 eV to 120 keV. They are shorter in wavelength than UV rays and longer than gamma rays. In many languages, X-radiation is called Röntgen radiation, after Wilhelm Conrad Röntgen, who is generally credited as their discoverer, and who had named them X-rays to signify an unknown type of radiation.

Hard X-rays can penetrate solid objects, and their largest use is to take images of the inside of objects in diagnostic radiography and crystallography. As a result, the term X-ray is metonymically used to refer to a radiographic image produced using this method, in addition to the method itself. By contrast, soft X-rays can hardly be said to penetrate matter at all; for instance, the attenuation length of 600 eV (~ 2 nm) x-rays in water is less than 1 micrometer. X-rays are a form of ionizing radiation, and exposure to them can be a health hazard.