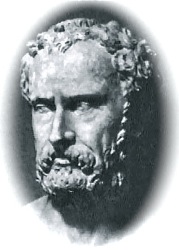 Xenophon's Symposium records the discussion of Socrates and company at a dinner given by Callias for his eromenos Autolycus, son of Lycon (not to be confused with the Lycon who was one of Socrates' prosecutors). 421 BC is the dramatic date of the work.

While Plato's Symposium consists of a series of lengthy speeches in praise of love, Xenophon's is dominated by witty repartee. A contest of words emerges between Socrates and Callias, and each of the symposiasts is asked to describe the thing which he prides himself on most. All their answers are playful or paradoxical: Socrates, for one, prides himself on his knowledge of the art of pimping.

Henry Graham Dakyns, a Victorian-era scholar who translated many works by Plato and Xenophon, believed that Plato knew of this work, and that it influenced him to some degree when he wrote his own Symposium.

Yet, throughout most of the twentieth century, scholarly opinion took the references to the army of lovers as proof that Xenophon had based his work on Plato's. Though some scholars have argued that the long speech of Socrates contains later additions, and opinion is divided as to which author was first to write a Socratic symposium, a work considered the standard study of this piece as of early 2000 holds that Xenophon wrote the Symposium in the second half of the 360s, benefiting from Plato's former Socratic literature.[1]