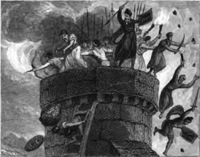 Zealotry was originally a political movement in the 1st century Second Temple Judaism which sought to incite the people of Iudaea Province to rebel against the Roman Empire and expel it from the Holy land by force of arms, most notably during the Great Jewish Revolt (66-70). Zealotry was described by Josephus as one of the "four sects" at this time. The zealots have been described as one of the first example of the use of terrorism.

The term Zealot, in Hebrew kanai (קנאי, frequently used in plural form, קנאים (kana'im)), means one who is zealous on behalf of God. The term derives from Greek ζηλωτής (zelotes), "emulator, zealous admirer or follower".

Josephus' Jewish Antiquities states that there were three main Jewish sects at this time, the Pharisees, the Sadducees, and the Essenes. The Zealots were a "fourth sect", founded by Judas of Galilee (also called Judas of Gamala) and Zadok the Pharisee in the year 6 against Quirinius' tax reform, shortly after the Roman state declared (what had most recently been the territory of Herod Archelaus) a Roman Province, and that they "agree in all other things with the Pharisaic notions; but they have an inviolable attachment to liberty, and say that God is to be their only Ruler and Lord."[1]