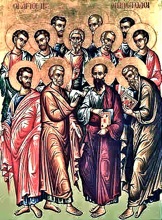 In Christianity, apostles (Ancient Greek: ἀπόστολος apostolos, one sent forth as a messenger) were missionaries among the leaders in the Early Church and, in the Epistle to the Hebrews, Jesus Christ himself. The term was also used, especially by the Gospel of Luke, for "the Twelve," Jesus' inner circle of disciples (students). They were, according to the Acts of the Apostles and Christian tradition, disciples whom Jesus of Nazareth had chosen, named, and trained in order to send them on a specific mission: the establishment of the Christian Church by evangelism and the spreading of the "good news", after being sent the Holy Spirit as "helper" (paraclete) in this task at Pentecost.

For lessons on the topic of Apostleship, follow this link.

Traditionally, the Twelve include Peter, Prince of the Apostles;[6] Andrew, James Zebedee, James Alpheus, John, Philip, Bartholomew, Matthew, Thomas, Judas], Simon, and Judas Iscariot. Judas had been one of the Twelve, but he betrayed Jesus and killed himself. With Judas gone, Matthias became one of the Twelve.

In the Synoptic Gospels, Mark names the Twelve, Matthew follows Mark, and Luke substitutes Jude for Mark's Thaddeus. John refers to the Twelve without naming them all, adds the name Nathanael, and uses the term "beloved disciple" (presumably for John). Jesus' inner circle of twelve disciples probably corresponds to the twelve tribes of Israel. In the Synoptics, Jesus selects Peter, James, and John to witness his divine Transfiguration and to be with him when he prays at Gethsemane. In Mark, the Twelve are obtuse, failing to understand the importance of Jesus' miracles and parables. The book of Acts recounts the deeds of the apostles in the years after Jesus' crucifixion.

Saint Paul claimed the role of Apostle to the Gentiles and, assuming Peter's role, became Apostle to the Jews (see also Circumcision controversy in early Christianity, Incident at Antioch, and Primacy of Simon Peter). He claimed a special commission from the risen Jesus, separate from the Great Commission given to the Twelve. Paul's mentor Barnabas is also termed an apostle. Paul did not restrict the term apostle to the Twelve, either because he didn't know it or resisted it. This restricted usage appears in Revelation. In modern usage, major missionaries are sometimes termed apostles, as in Saint Patrick, Apostle of Ireland.

The period of Early Christianity during the lifetimes of the apostles is called the Apostolic Age. In the second century, association with the apostles was esteemed as evidence of authority and orthodoxy. Paul's epistles were accepted as scripture (Development of the New Testament canon), and all four gospels were associated with apostles, as were other New Testament works. Various Christian texts, such as the Didache and the Apostolic Constitutions, were attributed to the Twelve Apostles. Bishops traced their lines of succession back to individual apostles, who were said to have established churches across great territories. Christian bishops have traditionally claimed authority deriving, by apostolic succession, from the Twelve.[2] Early church fathers came to be associated with apostles, such as Pope Clement I with Saint Peter . A medieval creed popular in the West was said to have been composed by the apostles themselves called the Apostles' Creed.[1]