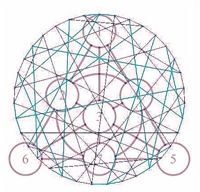 b : something (as a figure, contour, pattern, or apparatus) that results from a particular arrangement of parts or components
c : the stable structural makeup of a chemical compound especially with reference to the space relations of the constituent atoms

The formal study of configurations was first introduced by Theodor Reye in 1876, in the second edition of his book Geometrie der Lage, in the context of a discussion of Desargues' theorem. Ernst Steinitz wrote his dissertation on the subject in 1894, and they were popularized by Hilbert and Cohn-Vossen's 1932 book Anschaulische Geometrie (reprinted in English as Geometry and the Imagination).

Configurations may be studied either as concrete sets of points and lines in a specific geometry, such as the Euclidean or projective planes, or as abstract incidence structures. In the latter case they are closely related to regular hypergraphs and regular bipartite graphs.[1]